Grordbattle was revealed during Unity’s keynote 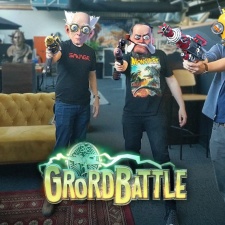 Shown off during Unity’s GDC keynote session, the multiplayer title takes place within the universe of Dr. Grordbort’s Invaders. The game works by tracking your eye movement while mirroring the voice of your chosen character.

Two to four players can battle one another in-game to compete for glory. Anyone attending GDC can test out the prototype exclusively at Unity’s booth.

Currently only available in the US, the Magic Leap One is designed to enhance your surroundings with digital objects while keeping real-world objects untouched. The product can be purchased from $2,295.