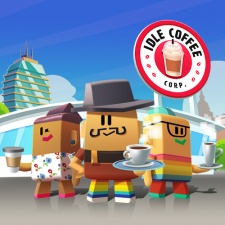 Idle Coffee Corp is currently featured by Apple and Google in all leading territories. Throughout the weekend after the global release, the mobile game has made its way to the top number one Strategy game in the US and the top 10 on the 'All Games' lists in 19 countries on the App Store and Google Play.

Serving coffee has become a crucial element that keeps our society moving. And to express the love for all the small cafes of our world we have published a game that uses vibrant 3D graphics and an endearing art style.

Antti Hattara, CEO of Starberry Games, explains how their team approached the idea for the game: “In the summer of 2018, we started to brainstorm potential ideas and themes for our idle game.

"The key criteria were to find something that appeals to a broad audience, which hasn’t been done before and where we can have an element of humour. Berlin has been home in recent years for third wave coffee and barista culture, so that idea stood out as a perfect candidate from our long list.”

Idle Coffee Corp is an idle game with the goal of growing your cafe into a booming business. Players reach increasing levels of success by rapidly upgrading their coffee stations, researching new coffee blends, as well as collecting special cards that provide boosts for the business.

Players can manage three different cafes located in New York, Berlin, and underwater Atlantis. Each cafe comes with its own set of coffee types and collectible cards.

One of the main mechanics of the game is the prestige system, which allows the players to restart their cafes with epic baristas - an income multiplier. Balancing upgrades to your sites, income and expansion is key to unlocking new features and maintaining the pace of your progress.

Each cafe includes a multitude of baristas, a manager who strives to collect income as fast as possible, as well as hundreds of clients being served the best coffee you can get in the gaming universe.

Antti Hattara describes how the cooperation between Starberry and BoomBit started: “We explored the publishing opportunity when we had tested the game and seen very encouraging KPIs. BoomBit and SuperScale, which works with BoomBit on business intelligence and data analysis, were extremely fast to do the first set of tests.

"From those very early tests, we were impressed by the very thorough approach to testing and the chance to be included in analysing results. We have been extremely satisfied with the publishing process. The best part of the cooperation has been definitely the great communication and fast responsiveness of the BoomBit team.”

BoomBit’s Co-CEO, Marcin Olejarz, comments on the game’s early success: “Idle Coffee Corp’s soft launch has demonstrated that the game is popular with a wide audience of players. It has low CPIs and good retention, which shows that mobile gamers are coming back to Idle Coffee Corp to expand their cafes.

"We firmly believe that the game will be successful, becoming one of our best titles for this year. And by looking at the launch weekend, we are even more confident about the game.”

Hannibal Soares, Co-CEO of BoomBit adds, “Our aim as a publisher is to find the best mobile games and bring our combined development experience, UA expertise and our data-driven strategies to the table.

"The roots of our company can be found in games development, and this is why we are able to bring a unique blend of approaches when helping developers publishing their games. We understand people who create gaming experiences.”

BoomBit S.A. is an international mobile games developer and publisher, as well as one of the largest Polish gaming companies. It operates on the global market, developing free-to-play games for iOS and Android, as well as for the Nintendo Switch.

At the moment there are almost 250 specialists working in various BoomBit offices located all over the world. The Gdansk-based company has a portfolio of hundreds of games with a combined download count of more than 550 million.

The company’s most popular games are Dancing Line, Build a Bridge!, Tanks a Lot!, Darts Club, Car Driving Simulator, as well as the Tiny Gladiators series.

BoomBit S.A. has debuted on the GPW Warsaw Stock Exchange main market on May 14th.

StarBerry Games is a mobile studio based in Berlin founded by four industry veterans with the mission of crafting outstanding games.