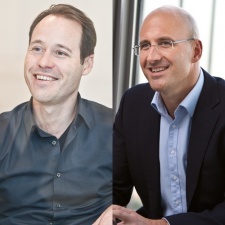 Nine gaming entrepreneurs have made it into The Sunday Times Rich List detailing the UK’s wealthiest 1,000 people in 2019.

The richest person whose source of income is from games is former King chairman Mel Morris, who is said to be worth £500 million and ranked at 268th, down from 251st in 2018. He’s said to have garnered much of his fortunes from investing early in Candy Crush Saga maker King. He currently owns British football Club Derby County.

Current King CEO Riccardo Zacconi (pictured main, right) meanwhile ranked at 336th. His wealth grew by £6 million for the year to an estimated £395m, though his ranking dropped three places from 333rd in 2018.

Another King staffer, chief creative officer and co-founder Sebastian Knutsson (pictured main, left), was ranked at 524th and is said to be worth £220m.

Elsewhere, Sam and Dan Houser were said to be worth £300 million, up £180m from last year. 4J studios chairman Chris van der Kuyl and co-founder Paddy Burns also made the list, as did Game founder Neil Taylor and Intouch Games co-founders Simon and Yu-Lin Wilson.

Frontier Developments CEO David Braben kept his place on the list at 891st, though his wealth was said to have fallen by £58m.

Combined, the UK games industry's richest people are worth more than £2.2 billion.

You can see how they all ranked below (Brackets represent changes from 2018):