Title based on the new Auto Chess craze 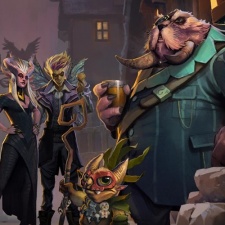 Underlords is Valve’s take on one of the hot new game types around - Auto Chess, built off the back of Drodo’s DOTA mod of the same name. The new stand-alone strategy game pits players against seven opponents, with a focus on tactics over twitch reflexes.

The title is available on iOS and Android devices, as well as of course on the company’s own PC game distribution platform Steam through Early Access.

As well as being Valve’s first mobile game, it’s also the first mobile title to be published using the Source 2 game engine.

At the time of writing, the peak concurrent player count for Underlords on Steam 120,035 - making it already the fourth most played game on Steam today just behind DOTA 2, Playerunknown’s Battlegrounds and Counter-Strike: Global Offensive.

Steamcharts pegs the all-time peak concurrent player count for Underlords at 120,715 so far.

As PCGamesInsider.biz points out, the number of players is markedly higher than Valve’s last game, Artifact, which hit a high of around 60,740 users.

It should be noted of course that Artifact is a premium title, whereas Underlords is free-to-play.

The original DOTA Auto Chess, on which Underlords is based, has become one of the PC platform's most popular titles despite only being available through the Steam Workshop. By the start of April it had racked up seven million users.

Valve had held discussions with the game's developer Drodo to discuss the future of the game and a potential collaboration. However the two companies "came to the conclusion that Valve and Drodo could not work directly with each other for a variety of reasons". Instead, the two decided to develop their own standalone titles.

Drodo signed with Chinese publisher Dragonest to launch a mobile game called Auto Chess, dropping the DOTA IP. That title is already in soft launch on smart devices and is now coming to the Epic Games Store.

Valve and Drodo aren't the only companies getting in on the action. Riot Games also recently revealed its own take on the Auto Chess formula, Teamfight Tactics.

What do mobile eSports games need to do to win?