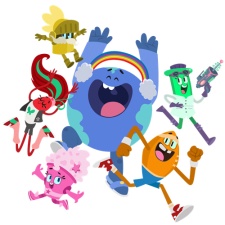 The show will launch for free on YouTube and YouTube Kids on September 12th. Based on characters from the mobile games, the series will feature 20 “bite-sized” episodes with the aim of teaching messages of acceptance and inclusion.

Much like the mobile games, it will also pass on interesting facts about people, the planet and the universe.

He has previously written theme songs and scores for the likes of Clifford's Puppy Days, Oobi and The Mr. Men Show.