"Thanks to our close relationship with ASUS we were able to finely tune Asphalt 9: Legends” 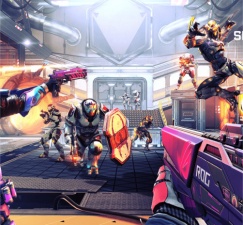 Game developers Gameloft and Madfinger have teamed up with Asus to bring exclusive content to the tech company's ROG Phone II.

Gameloft's Mobile Games Award-winning mobile racing title Asphalt 9: Legends will be available on the phone from the get-go. It's been enhanced to make full use of the phone's power, giving a frames per second increase and smoother display.

On top of this, a Porsche 911 with a ROG decal will be available exclusively for the mobile device. Gameloft teamed up with Porsche, making it the game’s official car brand.

This new version of Asphalt 9: Legends utilises the phone's built-vibration feature, dual-screen is also available for the game.

"At Gameloft, we are always trying to push the boundaries of videogames and we rely on a strong tech expertise that allows us to master our partners' ecosystems and devices," said Gameloft Global business director Henry Pan.

"Thanks to our close relationship with Asus, we were able to finely tune Asphalt 9: Legends to take the most out of the ROG Phone II and offer an incredible experience for the players as well as exclusive content to reward them."