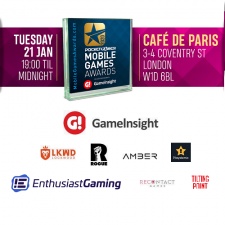 In less than a week, we will be launching into the next exciting phase of mobile games with the Pocket Gamer Mobile Games Awards 2020 in association with Game Insight.

Held on the evening of January 21st, after the doors close at Pocket Gamer Connects London, join us to celebrate the very best of the mobile games industry. This year, we’ve had more entries than ever before, which were whittled down to 185 finalists.

We’d like to give a special shoutout to the fantastic companies backing the Mobile Games Awards this year.

Founded in 2009, Game Insight is the world’s leading innovator of mobile and social games, creating exceptional gameplay experiences across casual to hardcore titles. With more than 350 million players, Game Insight is one of the largest games companies in the world. The company is pushing the boundaries of technology and graphics across all platforms to make the most entertaining and fun experiences for everyone.

Beginning in 2009, Lockwood Publishing was the leading content developer on PlayStation Home, Sony’s ground-breaking social environment. The Nottingham based business switched its focus to creating its own social platform on mobile platforms in 2013. Its core product, Avakin Life - where people customise their avatars in a rich, virtual world – has reached over 2 million downloads a month with over 70 million active users. Led by co-founder Halli Bjornsson, the company generated sales of over £18 million in 2018. The game is a global hit, with 95% of the company’s revenue coming from outside the UK, enjoying huge growth in the markets like North America, Brazil and Russia. The company is continuing on its strong growth trend by expanding out of its Nottingham based studio into new locations including Newcastle, Lisbon and Lithuania.

Amber is primed to support creative industries by offering a full range of turn-key product development and service solutions. The company maintains five service pillars, including game development, co-development, live operations, custom engineering and development support. Established in 2013, Amber has over 400 staff in its development centers and its team hails from some of the games industry's best and brightest companies including Electronic Arts, Ubisoft, Gameloft, Bandai Namco, Disney and others. Amber is an employee-owned company headquartered in Bucharest, Romania, with offices in Botosani, San Francisco and Los Angeles.

The passion of the Recontact Games, which starts with the motto of Playable Arts, is to build the films on videos and cinematic, which are direct game dynamics, not on multiple choice storytelling. In this form, Recontact will make a name for itself in the mobile gaming industry with original content.

Founded in 2010, Playdemic is one of Europe's leading mobile games companies. Based just outside Manchester in the UK, we focus on creating innovative, meaningful mobile games that engage and delight players. Our mission is to surprise players with games that exceed their expectations. We are asking for people's time and advocacy, and to achieve this we put their playing experience above all other considerations. We aim to build games players love. We believe that making the world's best games requires incredibly talented people, a highly stimulating and supportive environment, and the freedom to pursue excellence. These three elements are the foundation of Playdemic and our biggest priority. Playdemic is owned and run by a team of highly experienced Game Industry professionals with a strong track record of success in casual online and social gaming over the past 15 years.

Building the largest network of communities for gaming and esports fans, Enthusiast Gaming is the largest gaming network in the US, and globally reaches over 200 million gamers monthly. We are committed to building gaming communities of like-minded fans, providing sources of trusted gaming information, and producing engaging advertising experiences. We are here to help bring gaming into the future. Built by gamers, for gamers.

Thank you all - we couldn’t do it without you!

The Mobile Games Awards ceremony promises to be quite something: a gala evening of networking, three-course dinner, drinking and perhaps a little after-hours party in the company of elite industry figures at the swanky Café de Paris in central London.

Single tickets and tables are on sale now, but spaces are strictly limited, so no matter whether you want to celebrate being shortlisted for an award, treat your team after an amazing year, or simply make a statement of intent about how you’ll be changing the world in 2020, make sure you secure your ticket now.

Check out our finalists for 2020 here.

As we’ve just mentioned, spaces are limited, so book your tickets now to avoid disappointment!

If you can’t make it to the awards, make sure you sign up now for Pocket Gamer Connects London 2020 - it’s the biggest B2B mobile games conference in Europe, where you’ll do business with 2,500 games industry professionals from all around the world!

Who will win at the 2020 Mobile Games Awards?