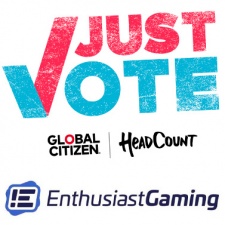 Enthusiast Gaming has teamed up with Global Citizen and HeadCount to encourage the younger generation to vote.

As part of the Just Vote initiative, this partnership aims to reach young American gamers and esports fans, to express the importance of being registered to vote as the presidential election draws closer.

"We are excited to partner with Enthusiast Gaming to engage with their significant platform of young gamers to reinforce the importance of voter registration and empower them to get out and vote," said Global Citizen CEO and co-founder Hugh Evans.

From now until October 5th, the campaign will run across all of Enthusiast's key media, including its YouTube channel. Those who wish to engage in the initiative can do so through the use of social media tags, #JustVote and #GamersVote.

Just Vote was launched earlier this month and has garnered the support of artists, influencers, media and companies. The aim is to encourage young Americans to use their voice for change.

Currently, 83 per cent of those aged 18-to-29 believe they can make a difference, yet only 60 per cent actually plan to vote in the 2020 presidential election.

As an incentive, rewards and exclusive experiences are being offered. More specifically, Enthusiast will provide participants with the chance to have a Fortnite games experience with Muselk, an influencer for Luminosity Gaming.

A variety of signed jerseys are also up for grabs, from major esports teams including the Vancouver Titans and Seattle Surge.

"We have a unique opportunity to work with one of the most influential, grassroots movements in the world to engage our platform of communities for gamers and esports fans to help change the world," said Enthusiast Gaming CEO Adrian Montgomery.

"Our platform has the largest gaming audience in North America and reaches over 300 million gamers monthly worldwide, of which 70% are Gen Z and Millennial gamers. It's brands like Global Citizen and HeadCount who recognize the value of these groups and their power to affect change.

"We are honoured to work with Global Citizen and HeadCount to help build awareness and promote the Just Vote movement and feel proud that they have partnered with us on this initiative."

For more information on the Just Vote campaign, you can visit the website here.