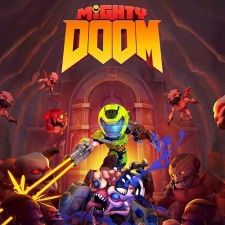 The free-to-play title is described as a run and gunner and a single-touch experience that has the Mini Slayer (a smaller version of the titular character) fighting waves of demons through miniaturised versions of iconic Doom locations.

It also looks to utilise a loot system to level up, upgrade and craft gear, as well as the ability to unlock fan-favourite weapons like the Plasma Rifle and Rocket Launcher.

Mighty Doom will be the first Doom game created specifically for the mobile platform in over a decade. The last entry was Doom II RPG in November 2009, which was developed by ID Software.

"Run and gun through hundreds of exciting levels and battle challenging bosses as you level up, gain powerful skills, loot new gear, and upgrade legendary weapons," reads the app description.

"Descend into iconic Doom worlds in this single-touch shooter with an animated style."

"Rip and tear anywhere when you become the Mini Slayer and conquer hundreds of challenging levels in Mighty Doom," it continues.

Mighty Doom is only available to play through Google Play Store's early access program, though testing is "currently full" for the minute but "space may open up later". No official launch date has been announced.

We reached out to Bethesda for more details but the company was unable to comment.

AlphaDog Games was purchased by Bethesda in October 2019, after the studio previously published the action RPG Wraithborne on iOS and Android.

Of course, Bethesda itself was subsequently acquired as part of the ZeniMax media deal by Microsoft a year later.