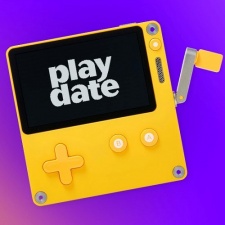 The Playdate sold out its initial manufacturing run of 20,000 units in 20 minutes.

After initially being revealed in May 2019, pre-orders went live on July 29th for the Game Boy-like device with a crank. The Playdate could be purchased for $179 (plus taxes and shipping) with the option to pick up an additional cover for $29 or a combo pack for both at $200.

Created by Panic, once set up by users, the Playdate will receive two new games for 12 weeks.

A separate stereo dock designed by Teenage Engineering will launch later this year as the Playdate's first official accessory. Alongside playing sounds via Bluetooth, it will also act as a charger and attach magnetically to the device.

It wasn't a smooth transaction for all, however, as the system for taking pre-orders struggled under demand. The company is aware and looking to address this/solve any outstanding orders that errored.

"Our most sincere apologies to any international customers who had difficulty checking out this morning," wrote Playdate (via Twitter).

"Our international shipping provider’s plug-in fell over under heavy load (despite our many warnings). Many orders went through, but many didn’t. We’re investigating options."

The Playdate will begin shipping in late 2021 and 2022, with those internationally likely to be part of the latter timeframe.

The handheld market is once again growing, with Valve recently unveiling the Steam Deck, a new Switch-like handheld that will run Steam games on the go.