The game features exclusive content based on the Stranger Things series 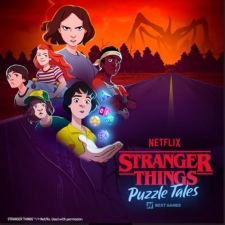 It was developed in collaboration with Netflix and has released globally.

The title is a story-driven puzzle role-playing game and is deeply rooted in the 80s science fiction horror drama series.

There are multiple game modes and puzzle mechanics alongside collectable characters and unique gear. There are unique Match-3 elements and enemies like the Demogorgons.

In fact, there are hundreds of supernatural monsters in this puzzle RPG.

Players will be able to collect more than 50 different versions of Stranger Things characters to navigate the mystery-stricken town. Unlocks will enable each character to master new abilities, allowing players to build an unstoppable team to head into the Upside Down.

“We are thrilled to launch this game together with our partners at Netflix. Crafted with care for both Stranger Things fans and puzzle RPG enthusiasts, the game is a unique combination of puzzle RPG play with the Stranger Things universe,” said Teemu Huuhtanen, CEO of Next Games.

“I’m very proud of Next Games for once again delivering an outstanding, fan-first experience. I’m looking forward to scaling up the game globally,” Huuhtanen continued.

You can find out more about the release here.