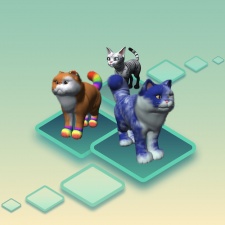 The funding round was led by Fabric Ventures and included participation from Animoca Brands, Dapper Labs, Sterling Capital, Spin Master, Skyvision, and more.

Additionally, the round included multiple angel investors, such as Kristian Segerstrale of Super Evil Megacorp, Sebastien Borget of The Sandbox, and games industry veteran Nick Button-Brown, who will also join the firm’s board.

Petaverse Network will bring digital pets to the blockchain and metaverse in the form of NFTs, and will allow users to bond, train, and evolve their pets. The first NFT drop – cats – is expected to occur in Q2 2022, followed by a second drop in Q3 2022.

Tiny Rebel Games will use the funding to accelerate the development of Petaverse Network, fund games and experiences on the platform, and scale its 20-strong team.

"There were 24 million people playing Nintendogs and loved them, bonded with them, played countless hours with them," said Tiny Rebel Games co-founder Susan Cummings (via Gamesbeat).

"And then Nintendo moved on from the DS. So Nintendogs is gone. We’re trying to create these resilient pets that aren’t tied to whether we continue to support these games."

Cummings has stated that Petaverse Network will eventually be available across multiple platforms, similar to other NFT collectible games.

Fabric Ventures general partner Anil Hansjee added: "We’re backing Petaverse Network for quite a number of reasons, but we’re particularly excited by their commitment to being an Open Standard. Their pets and platforms will be available for other projects to build on-to or inside-of – which is aligned with the Web3 principle of decentralisation and will grow the sector for all."