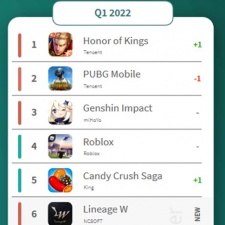 For the first time in history, year-over-year revenue from mobile games saw a decrease in the first quarter of 2022, Sensor Tower reports.

In Sensor Tower’s State of Mobile Gaming 2022 report, which details the top worldwide games and markets for mobile titles, it was found that player spending decreased by six per cent year-over-year this quarter, from $22.6 billion in Q1 2021 to $21.2 billion in 2022.

Compared to the first quarter of 2020, however, current spending is still up by almost 20 per cent.

In terms of regional revenues, the US remained on top since outpacing Japan in 2019. However, it has not managed to maintain its $6 billion in revenue this quarter, dropping by 10 per cent year-over-year and also experiencing a four per cent drop in downloads.

Japan has additionally seen a decrease in revenue, down by 18 per cent year-over-year.

Mobile game adoption has also increased in Q1 2022, and remains above levels seen prior to the pandemic. On the Google Play Store, this grew from 11.8 billion to 12 billion between Q1 2021 and 2022, and on the App Store it remained steady at 2.3 billion.

Having installs reach beyond 80 million, Vietnam has seen the most download growth this quarter with an increase by 21 per cent year-over-year. Meanwhile, India remains the largest download market with 15 per cent of worldwide installs, and Brazil has consolidated its position in third at 6 per cent.

In regards to worldwide revenue, Honor of Kings and PUBG Mobile have remained on top from last year, and MiHoYo’s Genshin Impact has held onto third. For the first time since the pandemic began, Pokémon GO has fallen from the top 10, and the only new game in a top position this quarter was Lineage W by NCSoft.

Whilst not as high in revenue, the most downloaded game of the quarter was Garena Free Fire.