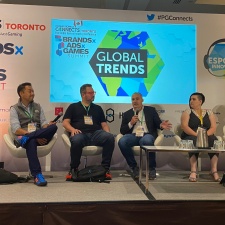 A quick snapshot from the PGC Toronto panel, How Has the Landscape of Games Publishing Changed After a Year of High-profile M&A?, F-Squared's Amanda Farough; Fenwick & West partner Stephen Fisher; Artisan Studios' Mario Rizzo; CVCapital's Ken Wing; and DLA Piper's Ryan Black discuss the impact and implications of the proliferation of M&A.

It has been an explosive year, with Microsoft, Apple, Epic, and Netflix proactively pursuing acquisitions to bring content to their platforms. But while its appeal is strongly recognisable in the PC/console environment, is it the right strategy when it comes to mobile?

Amanda Farough: Content is king, we’ve been hearing this for years and why we love to make and play games. When it comes to subscription services, there are a number of ways these deals go down – Apple Arcade and Xbox Game Pass were on a content-buying spree. We haven’t seen those deals dry up, but we’re no longer at the point where they are really as hungry or desperate because they’re in the retention stage.

Content needs to be steady and current. Engagement is everything, that’s really what publishers and platform holders are looking for.

Jim Ying: Subscription services have proven the core appeal, with enough content: as a father of three and being able to subscribe to Game Pass, it provides access to so many more games than I would be minded to buy.

But I question whether it makes sense in the mobile space. It is the platform for F2P games, and while Netflix are doing a great job of bringing in developers, I don’t quite see the value.

Ryan Black: Subscription services feel like an opportunity to pivot away and not have to use F2P mechanics, more than anything.

The full panel will be available for ticket holders to see after the conference.