More than half of that sum will come from mobile games 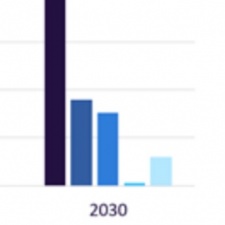 Whilst highlighting the importance of mobile to the gaming landscape, the latest report by data and analytics company GlobalData predicts that the games industry will be worth $470 billion by 2030. Mobile games will contribute more than half of that sum alone.

The industry grows on

According to the report, the fastest-growing section of the industry will be cloud gaming, seeing growth from roughly $2 billion to over $30 billion in the next eight years. However, mobile games will still "dominate" with revenues of more than $250 billion; the report categorises a mobile game as a game played on smartphones and tablets.

This projection remains fairly consistent with GlobalData’s expectations in 2021, when the company suggested 5G would help boost total mobile game revenues to $230 billion by 2030.

In the new report, the games industry as a whole is predicted to grow immensely from $197 billion in 2021 to more than double that at $470 by 2030. This is largely thanks to low barriers to entry and a growing market, GlobalData reports.

"Mobile gaming is already bigger than the console and PC gaming markets combined, contributing nearly 57 per cent of global video game revenue in 2021, and this dominance is only set to continue. Due to its popularity and lucrative revenue opportunities, traditional console and PC game publishers such as Activision Blizzard and Electronic Arts are increasingly focused on mobile gaming," said GlobalData principal analyst in thematic intelligence Rupantar Guha.

"The gaming industry is in the throes of a transformation driven by themes such as 5G, augmented reality (AR), virtual reality (VR), esports, cloud gaming, and the metaverse. As these themes mature, competition will intensify among traditional game publishers, tech giants, and companies in other sectors (e.g., retail and tourism). As a result, several leading game publishers will become M&A targets, with tech giants the likely acquirers."