InnoGames' Forge of Empires is the hit mobile game that's kept on giving for over a decade. At MTG Game Makers Day their CEO explained its secrets 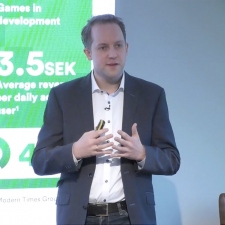 Today was Modern Times Group's MTG 2022 Game Day, a day where the publishing giant that plays host to studios such as InnoGames, Kongregate, Hutch, PlaySimple and Ninja Kiwi, gets to give the latest on hit franchises such as Forge of Empires, Top Drives, Animation Throwdown, WordTrip and more.

During the day MTG’s panel of expert CEO’s traded state-of-play hot topics and top tips both with each other and with the mobile gaming world at large.

Appearing at the event was InnoGames, home of Forge of Empires and a talk with Hendrik Klindworth their CEO.

InnoGames were founded in 2007 and found early success with Tribal Wars on browser before Forge of Empires, a Civilisation-style growth game that set the tone for the company and cemented [no pun intended] their reputation for world building, strategy and exploration games.

“We are here to make great games for all our players. High quality virtual worlds that link millions of people all around the world. Anywhere, any time,” said Klindworth before going on to describe their blanket policy of offering their games on both mobile and web browsers. “Our players can play on the phone and in the browser on a web device. That way players can start on one platform and continue playing on another. Another advantage is that we can save the high payment fees of Apple and Google,” Klindworth explained. “Plus Covid saw a greater number of players coming back to browser-based games,” he said.

The company joined MTG in 2016 and their primary focus game, Rise of Cultures, is now available on web as well as mobile. “Right now we have 10 live games, two in development and 1.5m daily active users, and the company prides itself on being the number one ‘city building’ app company.”

But despite recent success – such as new game Defenders, adding tower defence moves to their more familiar world building – it’s perhaps Forge of Empires for which the studio is most well known. Now over ten years old the game has proved an enduring success with no small part due to the team’s ongoing efforts at keeping their title on top and in favour with fickle players for over a decade.

The broad reach and breadth of these titles means that InnoGames is not dependent on any hit titles and can carefully and appropriately manage and maintain each one. However, the company isn’t afraid of making bigger moves when appropriate. “Sometimes we just make the call. It’s not the right thing to do and it’s time to move on. It’s important to make the decision at the right time,” said Klindworth.

The key component of the talk was the ongoing success of Forge of Empires. While some devs are brutal with their prototyping and mothballing the company has managed to fine-tune and improve FoE over ten years through careful use of LiveOps to drive monetisation.

“When it started out it would not be the right game for the market today. We’re always finding the right balance – creating a game that is still competitive but works from a business perspective,” said Klindworth.

It has done this by monitoring its audience. The average age of players is high at 48 and the game enjoys a broad 42% female / 56% male split. However, InnoGames then goes one further segregating players into separate groups: One Timers, High Rollers, Steady Ones, Careful Bundle Fans and Careful Package Fans.

Each is then presented individually with offers that are tailor made for their segment, be it bundles of new items, special offers to sustain their play or unbeatable bargains that lapsed players just won't be able to resist. “Welcome offers… Starter offers… Reactivation offers… Upselling… Cross-selling between games – using tech from PlaySimple – which is one of the advantages of working as part of the MTG group,” explained Klindworth.

That said, the team are careful not to give away too much or unfairly incentivise new players to the detriment of old hands. “If you want to have a game running for decades you have to keep a careful eye on your in-game economy. You can’t have inflation!” Klindworth explained.

Reinforce and reinvent with events offers and more

And a strict and predictable schedule of updates reinforces the reinvention of the title with new and exciting content being delivered every two weeks including events for Spring, an Archeology Event, a Soccer Event, a Summer Event, a Fall Event, Halloween, Winter, Christmas and so on.

2022 saw 10 events in total throughout the year and 200 event days generating 30% of annual revenue for the game.

Most of all however, in addition to the creativity of the small teams working collaboratively across the titles (with 30 or so working per game) it's their tech’s ability to react to player feedback and A/B test new features and show them what works and what doesn’t that bears the fruit.

No money? No problem

Perhaps most surprising of all it’s the company’s smart recognition that not all players want to spend money, and their laissez-faire attitude to this is commendable. “Most of the players don’t spend any money in our games. A significant amount still play for free. We need to make them the right offers. Give them something when they see enough value to part with their hard-earned money. Playing for free is fine. It’s part of the business model,” says Klindworth.

And the ongoing growth of Forge of Empires is just one of three main ‘North Stars’ that InnoGames announced. The second is more work on their Rise of Cultures game, with an “aim to make it as big as Forge of Empires. And the third is adding new vigour to Sunrise Village which “will be scaling through to 2024”.

We can’t wait to see what the team has planned through the year ahead.