How does Pro Evolution Soccer 2017 monetise on mobile? 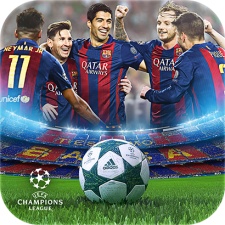 This time, we're taking a look at the mobile version of Pro Evolution Soccer 2017, which has finally launched worldwide after a long period in soft launch.

There was a time in the PlayStation 2 era when Konami's Pro Evolution Soccer was the clear favourite football sim among enthusiasts. Even at this time EA's officially-licensed juggernaut FIFA also sold well, but the two franchises were almost neck and neck.

In more recent years, that gap has widened as FIFA continues to dominate commercially and PES, despite maintaining an enthusiastic following and being well-received critically, has become more marginal.

FIFA also enjoys a significant following on mobile, leveraging its Ultimate Team mode in yearly mobile launches and most recently focusing on quick, asynchronous PvP with FIFA Mobile, which will likely be simply updated in a games-as-a-service model rather than succeeded by a whole new launch.

PES, meanwhile, has been absent from mobile for a while. There have been experiments like the card-based PES Collection and the Top Eleven-competing PES Club Manager, but nothing to directly challenge the likes of FIFA.

Elements of PES 2017 are heavily inspired by FIFA's Ultimate Team.

But after soft-launching in December 2016, PES 2017 has finally had a full release. Built in the same engine as the console version, with strong graphics and real-time PvP, there's a clear appeal there for players who felt let down by FIFA Mobile's relative simplicity.

Despite this, elements of PES 2017 are heavily inspired by FIFA's Ultimate Team.

Indeed, the game's core loop is built around recruiting players - some real, others not - and building a team that can compete against other players around the world.

You're given a team of no-marks to begin with, as well as two randomly-selected players from Barcelona's squad to inject some quality. The best players are obviously rarer, however, meaning that you're far more likely to receive a third-choice goalkeeper than Lionel Messi.

After this, it's up to you to improve your squad. You do this by buying an Agent and selecting the position you wish to strengthen, before entering a gacha system that involves a random ball being selected from a line-up.

Silver, gold and black balls are the equivalent of common, rare and epic cards.

There are three different colours available. In card battler parlance, a silver ball would be the equivalent of common, with gold and black representing rare and epic respectively.

Interestingly, the game also makes the value of buying bigger bundles of myClub Coins explicit by presenting the exact amount for which you are paying, and the amount you are getting above the standard rate.

myClub Coins can also be spent on Special Agents, which are timed offers tying into events.

At present, it's a special offering of players from the last 16 of the Champions League, for which Konami has the license.

Like FIFA Ultimate Team, the expiry of contracts is something else to consider.

Each player is only contracted to your side for 10 matches, with the amount of GP required to extend a contract rising based on the quality of the player in question.

It's costly, and for many the lack of choice to pay in GP could be seen as unnecessarily harsh, but my guess would be that this has as much to do with encouraging players to participate in the metagame as it does encouraging them to pay up.

In this regard, despite surface-level similarities to FIFA Ultimate Team, at its core PES 2017 has more in common with a mobile RPG like Summoners War.

Having established a gacha system for recruiting players assigned to varying tiers of quality and rarity, these players then gain experience and level up over time through playing matches.

The game's training element is also tantamount to a gacha-fusion system, encouraging the player to convert unwanted squad members into trainers, and then use them to upgrade the skills of others - in turn, discarding them.

Between the sim campaign in which you only handle tactics and matches play themselves, the focus on completing time-specific events for additional rewards, the feel and rhythm of the game is more like an RPG than any other genre.

A previously IAP Inspector article praised FIFA Mobile for demonstrating an understanding of mobile players by building around short, satisfying sessions. It was different enough from the console versions to make it worthwhile, with a proper free-to-play strategy.

There's enough room for both FIFA Mobile and PES 2017.

The same can be said of PES 2017, but it definitely feels as though there is more than enough room for both games.

Its approach to energy gating is questionable, and there becomes a point where managing the cost of contract renewals becomes difficult, but PES 2017 is largely a solid football sim with a deep, RPG-esque metagame at its heart.

Playing for free should be enough for a mid-table finish, but you might need to spend money to top the table.