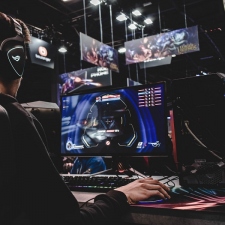 Really? One bad year and you’re looking for a way out? Come on Ubisoft, you’re one of the good guys. You literally are better than this. My gaming loves lineage is long and the Ubisoft brand crops up more times than most. Times were when a publisher's name on the box meant as much as the dev studio involved and Ubisoft played the game to perfection, carefully selecting new property to invest in, nurturing new talent and putting their money where their mouth is.

The risks were immense of course. Springing million here and there in the hope on bagging a hit from a new franchise, or recognising an indie-games talent and giving them the budget to go Triple A isn’t for the feint of heart. But Ubisoft got it right more often than not, and with a Euro-flavour that made them something different.

Of course they’re no stranger to the buy-out game themselves, hoovering up brands and big names but always ploughing the profits back to to ensure that they were always outputting their fare share of genuine new power franchises.

So is it really all about the money? You have one stinker and it’s time to get swallowed up and throw in the towel? Tencent and Actiblizz get to own everything? How long before there are three publishers on the planet (most likely owned by the hardware or delivery system required to play their games)?

We hope it isn’t so and that Ubisoft can find a way to stay strong and keep on.

eSports sponsorships are falling, but mobile could weather the storm

When I wrote about this story, I was going off the very intriguing notion that Bloomberg put forward in their article, which seemingly predicted a lot of doom and gloom for the eSports scene. As I laid out, I think the reason a lot of ‘big’ sponsors from businesses such as car manufacturing are stepping back is because the eSports crowd is much different than their regular sports viewers.

Their main audience is the middle-class, people for whom a new car is a serious proposition. But if you’re an eSports follower you’re likely to be young, technologically savvy and from an urban area. When you want more gaming equipment, a new browser extension or peripherals the last thing on your mind will be a Hyundai.

Of course, the point about FTX is an excellent one. Samuel Bankman-Fried has become everyone’s punching bag recently, from those angry about his damage to the crypto economy at such a crucial time, to those engaging in schadenfreude about ‘cryptobros’ losing out. However, for those whose livelihoods in eSports depended on FTX’s sponsorships, it’s not a laughing matter.

This is why I pointed to the Snapdragon Pro Series as being an excellent example of eSports sponsorships that understand the very basics of their audience. You watch mobile eSports, therefore you’d want a powerful, gaming capable phone, right? Seems a basic idea, but it touches on the most obvious aspect of advertising, which is understanding your audience.

I have somewhat mixed feelings about countries, or government-owned funds, investing in the games industry.

While I absolutely support countries funding development, I believe that investing directly into certain companies can be a somewhat risky move from the view of both consumers and existing shareholders. The reason for this is that it gives these countries a more direct say in the direction the company goes in future game development, which can result in characters, storylines, or settings being altered to fit that country’s social ideals and policies.

Saudi Arabia is a country which has strict censorship laws in contrast to numerous other countries. Even Japan, while more conservative in some ways that Western countries, features a sizable part of the media devoted to LGBT+ characters (for example) encompassing games, manga, anime, and live action films, all of which are strictly banned in Saudi Arabia.

By owning 6 percent of Nintendo, the country has a certain amount of sway in the direction the company takes in the future which could see games being adapted to more directly reflect Saudi Arabian values from the outset, as opposed to being censored for release within the country. This could potentially result in Nintendo developers imposing new restrictions in order to avoid controversy, or at the very least the PIF protesting against the inclusion of content Saudi Arabian players may find objectionable.

Shareholders have seemingly voiced their displeasure with the investment, with shares in Nintendo falling 1.8 percent following the announcement. This perhaps signifies increasing concern with the PIF’s potential to influence Nintendo’s decision-making progress in the future, even as content which may irk the country’s regulators becomes increasingly commonplace, and accepted, in the games space.