As the number and value of M&A continue to rise, Martin Macmillan, CEO of Pollen VC outlines a 'rational framework' for valuing a mobile gaming studio 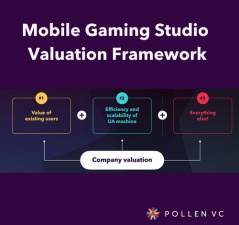 As I write, the mobile games industry has experienced a record period of mergers and acquisitions (M&A) with more than 32 deals totalling more than $33 billion, often with eye-watering valuations*. Time will tell if these acquisitions have delivered the expected returns.

In this post, rather than focus on certain deals and multiples, we will try to set out a rational framework for how to value a mobile gaming studio based on some fundamentals of how these companies operate.

As the gaming industry is attracting more capital from outside the traditional core of a handful of gaming venture capitalists (VCs) and very large established studios, there is a greater propensity for more generalist investors to not fully grasp some of the key value drivers of a games studio in their initial analysis.

We’re going to take a bottom-up approach, setting out a series of building blocks - based on the key value drivers within the business - which can be assembled to arrive at an overall valuation.

M&A valuation methodologies - Top down vs bottom up

Let’s start with a simple assumption - that you stopped acquiring any new users/players today. What would the expected future value of those current players be? Let’s call this Residual Cohort Value (RCV). We are essentially looking to take a present value of RCV, discounting how long it will take to achieve it back to today at an assumed cost of capital required to finance it.

In order to do this, the LTV profile of the users needs to be understood as well as the shape of the LTV curve, and how far each of the existing user cohorts are in their journey. Data from internal business intelligence (BI) and/or external sources like a mobile measurement partner (eg Appsflyer, Adjust) can be helpful in valuing RCV.

If a studio has been spending money on user acquisition for a long period of time and has long-dated LTVs, there can be substantial value trapped in these cohorts. Any business buyer will be acquiring a fairly low-risk stream of future revenue since these users have already been acquired (and paid for), and therefore outside the reach of the whims of the mobile advertising market.

Conversely, if a studio is relatively new and has not accumulated much spend to date on users, and the LTV duration of the user is relatively short, then there is likely to be little in the way of RCV to feed into the valuation formula.

For more information on RCV check out my article on PocketGamer - “How much are you players really worth?” and also this high-level RCV estimation calculator.

Next, we’re going to drill into the studio's user acquisition (UA) machine. By 'machine' we mean the user acquisition investment formula the company can operate to acquire players for their games. This is the lifeblood of any mobile gaming studio and sets the whole tone of how a game can scale up and become successful.

In order to figure out the financial returns we need to understand the acquisition cost of a user (CAC), model the LTV of a user and, importantly, the timeframe required to deliver the LTV. We need to calculate the profitability of a user (LTV - CAC), and then look at how long it takes to achieve that return, expressing it as a return on investment (ROI) percentage.

In this example cohort of a mid-core game, the expected profit of $2.00 takes 360 days to achieve, returning a 67 per cent return on capital. Some studios look to work with a monthly metric to make capital allocation decisions across different games on where to spend on UA. In this example (ignoring the convexity of the LTV curve) we get to a 5.6 per cent monthly return on capital of our UA machine.

So longer LTV duration games are typically much more capital intensive to fund to breakeven status, which is why so many gaming companies have raised substantial Series B or later equity rounds. Of course, these games are building a lot more kinetic energy in the UA flywheel so at the point of valuation/acquisition they should have a lot more RCV (see section above).

But the main thrust of this framework component is to put a monetary value on the machine, and how much that is worth to an acquirer. Of course, demand economics kick in, CAC rises over time, and LTV falls. So it becomes uneconomic to spend beyond a certain level. This is normally thought of in terms of a daily spend cap. This could maybe be $10,000 per day in a more niche genre or $100,000 in a more mass market genre. So the scalability of the UA machine is a key factor in establishing the price to pay for it.

When considering the financial returns of the machine, you may wish to consider how you would fund the machine. If you are a cash-rich acquirer with money sitting in the bank earning virtually no interest, you are probably happy with a 2.5% monthly return on the dead cash on your balance sheet.

There are multiple factors to consider when valuing the UA machine...

Or you may wish to introduce leverage from a bank or specialist lender in order to fund the UA cycles by borrowing against AR since platform receivables can take up to 90 days to be paid out by the app stores and ad networks. You may even want to borrow against RCV if the lender is capable of valuing this.

Of course, all of this is simplified when we are talking about a single CAC and LTV number. There are multiple factors to consider when valuing the UA machine, for example, paid vs organically acquired users, and also every geography will have different metrics, so some fairly complex modelling is required to really understand this.

In early 2021, Apple announced significant privacy changes to the way user data collected on its platform could be shared. First-party data (data about a game's players that is collected and owned by that company) suddenly became very valuable.

By acquiring a game with a strong and loyal player base - and legal access to their first-party data - an acquirer can then use this data to market its other games to those users, known in the industry as cross-promotion. Most of the large gaming acquirers are currently looking to build 'content fortresses' based on first-party data and cross-promotion strategies

As it is first-party data, the acquirer will know the exact LTV profile of the users they are serving ads to and their propensity to spend on existing games. Obviously, there is a risk of cannibalisation of an existing player base, but a successful cross-promotion strategy can be extremely valuable as it effectively eliminates user acquisition costs.

Consider the financial returns that can be made from your UA machine if your CAC drops to, or near, zero. An acquirer should want to dig deep into the ability to cross-promote to the target’s user base and ascribe a potential value uplift as part of their valuation calculation.

For an acquisition of any scale, the financial metrics are hugely important. It’s how M&A is justified to shareholders if the acquirer is publicly listed and offers a financial basis for the transaction.

But of course, there are many non-financial factors at play in an acquisition, and although harder to value they can never be underestimated. Good valuation uplifts for founders can be achieved if they have a strong team, good brand presence or other factors like new channels to commercialise intellectual property (IP) in different channels (think Angry Birds) if they were part of a wider group that had expertise in this area.

The team’s ability to create new games and expand the IP portfolio is obviously a factor here, but in a hits-driven business, it’s hard to ascribe too much value to something that may or may not happen. Some of the most successful gaming studios of the first wave of mobile gaming have struggled to deliver subsequent hits and are instead turning their attention to investing in and acquiring earlier stage studios.

Lastly, the ongoing cost profile of the company is critical to understand. What are the costs involved to support live operations of the game which are fundamental to keeping players engaged? And what about costs of content creation, such as new levels within a game? If these are not factored in correctly and well understood, it could have a significant impact on player retention and ultimate LTV recovery.

...in a hits-driven business, it’s hard to ascribe too much value to something that may or may not happen

Everything is a DCF

Discounted Cash Flow (DCF) is a traditional valuation analysis typically used to value later-stage, profitable companies based on an expected stream of future cash flows discounted back to today at an interest rate based on the acquirer’s prevailing cost of capital.

It is normally tossed to the side as a valuation technique to value pre-revenue or unprofitable companies. But it can be argued that any valuation is a DCF - an upfront investment now based on an expectation or future cash flows. The swing factor here is certainty. For sure, a seed stage VC investor is still expecting to see an expected return in the future, it’s just way less certain.

Interestingly this is where mobile gaming diverges from much of the wider technology sector as so much of the value created can be modelled fairly easily by examining the UA dynamics of the games, and the outputs of the framework components above can be fed into a DCF model.

Let’s always remember the first principle of value - something is worth what someone is prepared to pay for it. The M&A bankers have had a very successful run over the last two years creating a lot of value for founders, VCs and hopefully the acquirers. There has been so much interest and new capital flowing into the sector that valuations have hit record highs.