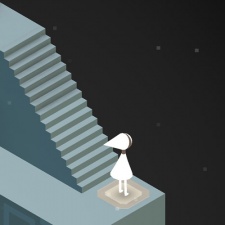 Monument Valley - ustwo's $3.99 Game of the Year in many people's view - is the game that keeps on giving - both in terms of data and debate.

The UK studio has now released a detailed infographic concerning the game's sales.

576,000 players (or 34 percent of the iOS user base) bought the Forgotten Shores IAP pack.

According to its Flurry analytics, the game has been installed on over 10 million devices, however.

The difference is mainly due to piracy; something the company has been vocal about, especially in terms of it mainly occurring from Google Play.

The resulting revenue is $5.9 million (this seems to be net of the platform holder's 30 percent cut), of which 82 percent came from iOS.

The total development costs were hence $1.4 million, giving an overall profit a $4.5 million.

While this four-fold amount seems impressive, however, if ustwo hadn't made Forgotten Shores (which cost $1.99, hence generating around $800,000), its profit margin would have been almost six-fold.

Equally, given publicity and strong backing from platform holders the game has generated, others have pointed out the fact that ustwo can only generate a maximum of $5 gross from each player demonstrates how the financial success of paid games is severely limited.

In comparison, top grossing free-to-play games can generate hundreds of thousands of dollars daily, with ongoing success resulting in revenues rising over time.

You can see the complete infographic here.

With a conversion rate of 10%, ustwo's Monument Valley IAP has paid off