From PR guru to GameMaker: The Byronic Man's adventures in mobile game publishing

The first week of Up, Down, Left, Right revealed 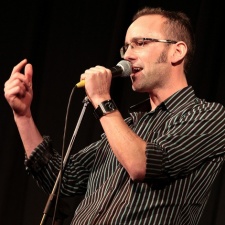 Hello, my name is Simon Byron and, despite working in the games industry for a million years (technically since 1992), I’ve never actually made a game.

I’ve been credited on them, sure, but I’d never put pen to paper or finger to keyboard and developed something myself.

Until two months ago.

I’d been inspired by the number of people in my Twitter stream who were toying with GameMaker. Tom Francis had left his actual job thanks to Gunpoint. Other GameMaker projects such as Hotline Miami and Spelunky  had been lighting up the charts for months.

And the bloke who made Thomas Was Alone  - a game with no actual graphics in it - had become so successful that aspiring developers now hope to become Bithellionaires.

I decided the time was right for me to jump in, as Xbox used to say.

The challenge seemed fell into place: ask them to alter the sequence one key at a time - and very quickly the idea of a super-fast rhythm action puzzler which crossed the variation of repetition found in Papers, Please with the low scores and instant restarts of Terry C’s Super Hexagon was formed.

The game was made on and off in the evenings, over a couple of months. I was surprised by the process - Up, Down, Left, Right  made great strides initially and then took absolutely ages to finish.

Knocking it into a shape where I felt comfortable releasing it must have taken half the total time.

Admittedly by the end I released it on Android in a slightly scruffy state - there’s a little tidying to do ahead of the iOS version.

Given I’ve felt slightly fraudulent about making a game, I decided from the off it would be funded by advertising. I’m a man who can’t make games, making a game. What a strange world.

I’m a man who can’t make games, making a game. What a strange world.

It’s never been about making money, more about the experience of developing and publishing an app. I’m learning all the time.

Weight is clearly attached to titles which are being downloaded, so it’s now first - but not appearing first despite having a unique name surprised me. I understood the difficulty Threes had with the clones when it was first ported to Android.

Google reports on activity a day behind, so I now have stats for the first week the game has been available. It has been absolutely fascinating watching it ebb and flow, and I hope to share my findings with you over the coming weeks.

I’ll be honest - I had no idea what to expect from Up, Down, Left, Right, which has made it all the more fascinating. I thought it could fall flat on its face or potentially soar like Flappy Bird. The truth is somewhere in between - though much closer to the falling on its face.

I’d been banging on about it to my Twitter followers and Facebook friends. In addition, I issued a press release to the mobile press, which resulted in a few pieces of coverage on launch day, including Pocket Gamer, which I was enormously grateful for.

To date, 2,388 users have installed Up, Down, Left, Right on one or more of their devices.

By the end of launch day, 258 people had installed it. The biggest rise came between days two and four, where it jumped from 528 to 1,838 in 48 hours - pieces on Forbes.com and Droid Gamers being the main drivers, I think.

Certainly, those two pieces were retweeted by a mixture of individuals bots a surprising number of times.

Given the volume of Android apps released each day, I’m over the moon with almost 2,500 people downloading it - particularly as I’ve spent nothing on marketing. The Guardian included it as part of their best apps of the week piece, which may also explain part of the 500 fresh installs over the last two days. We will see how this develops.

What’s also interesting is the following two graphs showing the total installs by day and the number of people who have uninstalled the game.

There is a huge amount of churn - for each new user playing the game, an almost equal number are deleting it.

This is no surprise. For one, the concept of the game is simple, but it’s hard to understand. The tutorial proved the trickiest part for me. It’s not perfect and it still needs work, but I’m pleased some people are getting it.

I knew the biggest challenge would be short attention spans failing to give it the two minutes it requires to fully understand. Plus, it’s free - there’s no commitment from the end users. Mobile data is disposable, yet space on the phone is precious. If you’re not a must-play, you don’t stand a chance.

The early adopters helped keep the average review score nudging five out of five during the first few days, which reaffirmed my faith in the game and have helped encourage browsers to hit download.

However, as time has gone on, the number of low scores have increased.

Out of the 14 one-star reviews, only one has left a comment. It’s frustrating - when you have 66 scores in total, half of which are top scores, each low one knocks down the average by more than I think it should.

I’ve looked at the profiles of some of the people who have just clicked one-star and many seem to do that indiscriminately across a range of apps for fun.

A friend of mine was over on Saturday. On that day, she literally made more money from buying a scratchcard than I did on the game I spent two months making. If you want riches, the Lottery seems a more likely way of going about it.

Given I didn’t feel I could charge for the game, ad funding was the only way to go. I put a banner advert on the title screen and added an interstitial every time someone hit “back”. The game is instant restart so I figured that the average player would only see two adverts during each session.

Either I’ve miscalculated, or even this is too much - a few lower-scoring reviews have cited adverts as the only negative.

Yet all this intrusion has netted me a total of a week’s earnings of an estimated £8.89.

Luftrausers was profitable an hour after launch. I bought GameMaker Studio and the Android export module with real money so Up, Down, Left, Right remains £145 in the red, minus whatever my time would have cost. £145 down so far, then.

According to App Annie, with the exception of Canada, the game continues to rise slowly up the charts - at the time of writing it’s the 261st most popular puzzle game in the Google Play Store.

With press coverage now dwindling, it’ll be interesting to see whether word of mouth helps maintain momentum - I’m hoping those enjoying it will pass it on. I will not be using the services of the companies who’ve spammed me to offer guaranteed downloads for money.

I’ve access to a Mac now, so can begin working on the iOS export of the game - it’ll definitely require a little tidying before it gets passed their tests, I think. That’ll mean the Android version will also benefit from a slight refresh, I guess - so that’s about three weeks down the line.

I’m looking forward to publishing on a platform that doesn’t have so many hardware variants - a couple of people have mentioned performance issues on Samsung devices, but nowhere near enough for it to affect all of them.

I’d be interested to hear how the experiences above sit with that of a “typical” game. Do let me know, won’t you.

Android owners can download Up, Down, Left, Right for free here

iOS owners should stand by for news soon.