How Ball Mayhem! went from concept to over eight million downloads 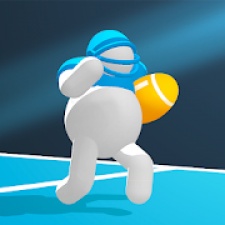 Voodoo is known today as the best hyper-casual games publisher in the world.

Some of Voodoo's hit games such as Paper.io, Hole.io or the more recent Tiny Loops were made by its Montpellier studio in the south of France, set up in Voodoo's early days. Today it counts more than 10 talented developers working on delivering the best hyper-casual games in the market.

Voodoo's biggest in-house studio is located at its Paris headquarters, where more than 20 people are working on developing the next generation of mobile games by analysing, dissecting and exploring the best gameplay experiences.

Alongside the marketing, tech and publishing frameworks, the studio is constantly aiming at focusing its efforts on bringing up the quality of hyper-casual games.

The team’s vision and strategy rest on high level requirements on the product side and a continuous R&D focus.

Ball Mayhem! is a game that was released thanks to a deep understanding of the market and the widening possibilities for game design with today’s tech.

Surfing on the Super Bowl trend, the Paris team came up with the idea of developing a game centred on American football - simple and accessible to every mobile gamer. Through a simple drag-to-move mechanic and amusing ragdoll characters, they successfully generated more than eight million app downloads in a single month.

The challenge was demanding but well worth the effort. From a game design perspective this unique hyper-casual title illustrates that the market evolves extremely fast and that developers have to constantly push the boundaries and challenge themselves to create new gameplay experiences.

In regards to the tech aspects, it required a good level of expertise to handle ragdoll and AI features, both crucial aspects of the core feeling of the game. Furthermore, optimising the game for all the devices was the last challenge the team worked on before releasing it on the stores.

Take part in the adventure

Voodoo is looking for new talent to join the team! The company is currently going through a hyper-growth phase and has 180 open positions for 2019.

Working at Voodoo is a unique opportunity to be part of a young and rising games company. The French company opened a studio in Berlin in December 2018 and recently unveiled two new openings in Barcelona and Amsterdam.

If you feel that delivering fun and entertaining games to millions of people all around the world could fit your job expectations, don’t hesitate to reach out to them!

Developing games requires constant creativity and the hyper-casual genre is no exception to the rule. The production speed that is required fosters innovation at every step of the way.

At Voodoo, every studio is free to organise themselves as they want, experiment with different configurations and share outcomes with other team members.