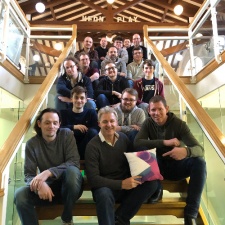 Founded in 2010, Neon Play is a long-established mobile games studio based in Cirencester, Gloucestershire in the UK.

The developer has had big hits over the years including Flick Football, Traffic Panic London and Paper Glider, which famously became Apple’s 10 billionth app download in 2011.

Talks got off to a good start after Voodoo look at the developer’s early App Store launches and liked what it saw.

“We initially worked with them on Soccer Kick, which launched before the 2018 World Cup, and it's still a top 100 game nine months later,” says Christie.

“We’ve continued to test other games with Voodoo through quick prototyping, regular calls and feedback. Our experience in making casual mobile games over the last 10 years, coupled with Voodoo’s knowledge and success in the hyper-casual market, has been a cracking mix.

“As a studio, we believe in testing quickly and failing fast. If a game has potential with a low CPI and strong retention, then we build on it. If both those metrics look poor, we put the game on a shelf, but have a post-mortem for each game to work out why we think it hasn’t performed well and which tiny bits of the game are super-satisfying and fun.

“Ideas and gameplay mechanics are king in the hyper-casual market and so every month we do a hackathon where each member of the Neon Play team creates a game in a day. We hope that one or two of those prototypes have the early potential to become publishable games, but in reality it’s a low hit rate market."

It was from one these hackathons at the end of 2018 where the concept for Roller Splat emerged. Christie states the idea for the game hasn’t changed: “You just need to paint every square of a maze, but you can cover your tracks if you want. So it’s part-puzzle, but always very achievable. It’s very, very simple."

After Neon Play shared the game with Voodoo, the publisher focused on the satisfaction of playing, which led to some changes.

“It was a bit slow and boring to play, but following one of our calls, we decided to really make the paintball fly quickly around the maze, with more of a sense of momentum and paint splatting and spitting out,” says Christie.

This simple change hugely increased retention and as the game already had a low CPI, it was fairly quick to get to a launchable state.

Within just two days of launch the game went to number one in the USA, which was a genuine “wow” moment and the champagne flowed at Neon Play HQ. since then it’s been the top game in 57 countries with over 10 million downloads in just three weeks.

“Neon Play had reached the top spot several times back in 2010 and 2011, but the market these days is so much more competitive and you really need a game to hit some very high metrics to have any chance of success,” says Christie. “And working closely with Voodoo has made this possible.

"We have a roadmap for Roller Splat with loads of new levels, numerous updates and A/B tests so that we can continue to increase retention with marginal gains and do our joint best to keep the CPI as low as possible."

Neon Play has once again proven itself adept in the mobile games space and as a leading UK studio in the sector.

While it’ll continue development on Roller Splat to make it an even bigger hit, the developer has other projects planned for the months and years ahead.

"We have an excellent relationship with the team at Voodoo and really enjoy the process of making games together,” says Christie.

“We hope to be able to launch more games with them in the future in this very competitive app store landscape.”