August 31st, 2011 - 11:30am
By Keith Andrew
Reports detailing smartphone share tend to focus on the positive, more recently tracking the meteoric rise of Android during the last year or so.

Numbers for the month of July released by comScore yet again depict a US market dominated by Google's OS, but it's also hard to ignore to fate the previous chart toppers: in a market still reacting to HP's withdrawal, the position of the likes of RIM and Motorola look increasingly fragile.

RIM and Google, for instance, have essentially swapped places in the US over the course of the last year.

In July 2010, BlackBerry held an almost 40 percent share of the smartphone market  a hand that has fallen to 21.7 percent in the latest count.

In contrast, Android's share is up 24.8 percentage points during the same period, currently sitting at 41.8 percent. 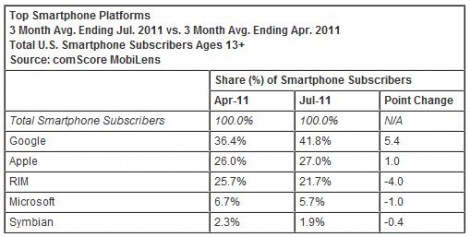 Microsoft's share has also halved since July 2010, though working from a smaller base to begin with.

Indeed, positive news  if it can be called that  comes in the form of a slowing decline for the firm's share, with Windows Phone appearing to gain a foothold in the US, though not yet on the scale of its predecessor, Windows Mobile.

On the manufacturer front, Motorola's slip is nowhere near as dramatic as BlackBerry's, but the firm  set to be acquired by Google for $12.5 billion  has seen its share fall by almost a quarter during the last 12 months.

Motorola holds a 14.1 percent share of the mobile market, according to comScore, down from 19.8 percent in July 2010. 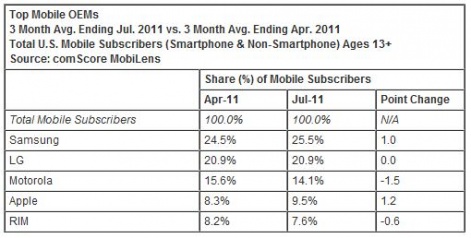 LG, which also appears to be in some difficulty, is in a stronger position on a 20.9 percent share, but it can't compete with market leader Samsung on 25.5 percent, up 2.4 percentage points in the last 12 months.