At the present rate, RIM could lose its US user base by the end of 2012 reckons analyst asymco

October 7th, 2011 - 12:49pm
By Keith Andrew
After comScore's summation of the smartphone market in the US, so comes market analyst and asymco founder Horace Dediu's analysis of the state of play, and it makes grim reading for RIM.

According to Dediu's aggregation of comScore's MobiLens numbers - which details the penetration of both OEMs and platforms in the US every month - BlackBerry is currently losing 1.2 million subscribers a month.

Admittedly, that's from a high base  even now, comScore evaluates RIM still controls just shy of 20 percent of the market  but if that rate continued apace, BlackBerry could be wiped out before the end of 2012.

"The company has lost 4.3 million users in the last year and is now at about the same number of users it had in late 2009. This is in a market that has more than doubled."

While iOS and especially Android are growing fast, and even Microsoft  which lost millions of users almost by default during the transition from Windows Mobile to Windows Phone  has stablised, BlackBerry's user retention has fallen through the floor.

"With only about 16.5 million US users and an average loss of half a million users per month, unless something drastic happens, RIM could lose its entire US user base by the end of next year." 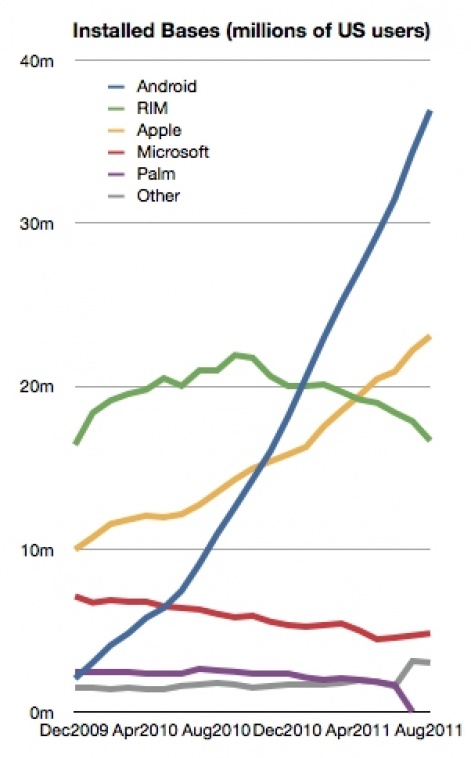 RIM's loss is, naturally, its rivals' gain, with Dediu claiming its "likely that those 4.3 million who left Blackberry went to other smartphones" such as Android or iOS.

This chimes with a survey from ad network InMobi, which found 52 percent of BlackBerry users would have considered switching to iPhone 5.

"This sort of switch is often painful and I can only imagine that its done with some reluctance. All the more remarkable then that RIM could not offer incentives to stay," he concludes.

"The Blackberry brand is fading rapidly and brand value is very hard to re-build."