Speeding away with Sega 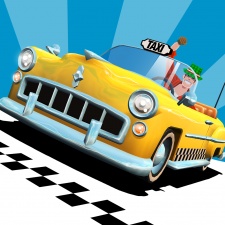 Talk to any Dreamcast aficionado and chances are Crazy Taxi - a game about erratically ferrying passengers around a city at speed - will, more than likely, be cited as one of the console's madcap highlights.

History suggests Crazy Taxi knows how to travel, too.

The game transferred from arcade cabinet to living room flawlessly and now, almost a decade and a half later, a condensed version of it is available on mobile.

As well as the original game being squeezed into our pockets like a demented, taxi-themed Hot Wheels adaptation, there's a newer, more mobile-tailored reimagining available - Crazy Taxi: City Rush.

The studio behind this latest envisioning, Sega Hardlight, grew out from an internal Technology Group for Sega West in early 2012. Though it began as a seed of a small set of experienced console developers, it's since grown to a team of 35 people in Leamingto Spa who are dedicated to free-to-play mobile development.

Growing up, growing out

Chris Southall is Hardlight's studio head and has worked at Sega Europe for almost ten years.

His career started at Codemasters in the mid-‘90s, cutting his teeth on level design for Micro Machines V3 (he already knows a thing or two about shrinking cars, then), and designing and coding the Colin McRae Rally series.

The idea to create a mobile-focused Crazy Taxi came from the game's original creator, Kenji Kanno.

"We first met in Japan in 2005 and have talked about how Crazy Taxi could be in the intervening years, so when he searched for the right dev team for his project he came straight to us at Hardlight," remembers Southall.

"Interestingly enough, we added and transformed a few of the things he designed, but we stayed very close to the project he had originally proposed."

We wanted to focus on something very accessible for the mobile audience in the West.

When it comes to retaining the essence of the series, having the game's original director working closely with the team paid dividends.

"Firstly, we spent a long time with Kanno-san, after seeing his initial design, working that up into something detailed enough so the team knew what they were aiming at - having the original game director this closely involved at the beginning of the project was key," recalls Southall.

"Secondly, in prototype phase, we spent a long time working on the controls for the game with back and forth with Kanno-san to answer the fundamental question: Can we make the feeling from the original game come through with a much less hardcore driving mechanic and control setup?"

With the controls, the lack of a physical input like an analogue stick led to the team trying lots of different control methods and iterations before settling on the current system, which uses tap controls to switch lanes and swipes to corner.

"We spent a lot of time trying a lot of different ways to control the game, including simulation physics with tilt to steer - that one didn't feel snappy and immediate enough for what we were aiming at," says Southall.

"The original game is a pretty detailed driving sim for its time, but we wanted to focus on something very accessible for the mobile audience in the West, and decided not to go down this route.

"With the final controls, I personally believe tap to change lanes and swipe for junctions wins out - supporting junctions and the potential for free driving around a bespoke modelled open-world environment was definitely a big challenge."

Although the open-world is modelled as such, the game automatically picks up and drops off the player's customers - they just control the driving between those two predetermined points. It's a departure from the design or the original game, but one that felt right for the platform of choice.

"From the drawing board, the game always went with the auto pick-up and auto drop-off system," says Southall. "The player can ignore the arrow and still find their way to the goal in some places. Moving more open-world for later, higher skilled players is definitely something we are considering."

Because of the series' transition from console to Unity-developed mobile game, there were bound to be some fundamental changes, such as the controls and the loss of the open-world aspect.

Another thing lost in the switch was the original game's iconic soundtrack: "We tried seeing how the music felt with the new game, but it just didn't fit with making a new game for a new platform over a decade apart from its parent."

As well as the music, some things didn't make it into the final game because, like most of my attempted customer drop-offs in the game, there just wasn't enough time.

"There were some things such as time of day, or clans - which slipped out of our scope during development - and this was really because Crazy Taxi: City Rush is a big game already and we ran out of time," says Southall.

The game was built with a desire to transfer the ‘feel' of Crazy Taxi onto mobile, but at the same time making something that feels new and right for mobile.

As well as these core tenets, Crazy Taxi: City Rush was always designed with Hardlight's free-to-play pedigree in mind. For Hardlight, a team coming from a console racing and free-to-play heritage, making the game feel fair while being free-to-play came naturally.

"The core game design was about how the game should be fun and how a player can progress over time, then interact with friends and hopefully end up having something that is a bit like their hobby to play," says Southall of the design ethos.

"That didn't need to be free-to-play necessarily, but definitely from the early meetings, we always were aiming at free-to-play."

From the early meetings, we always were aiming at free-to-play.

Making the game stand out in all the free-to-play traffic on the App Store was down to aesthetics and a dose of originality.

"I think the art style in both the UI and game is quite different from anything else," explains Southall.

"There's also nothing we're aware of which layers lane changing with junction selection like that, and it was a major challenge to get that working well."

In fact, Southall says that the junctions were such a challenge to get right that even now some players don't ‘get' the system straight away, but when they do it works very well.

The game's downloads have accelerated in its first month and we're led to believe Sega is very happy with the game's lap times thus far.

With this week's Hulk Hogan-powered advertising push of nitrous-oxide proportions, the game looks set to achieve a new personal best when it comes to downloads. On top of this, Hardlight is planning to keep the game fresh with intermittent new paint jobs.

"We're doing some seasonal stuff where the team have really pulled out the stops," Sothall reveals. "After that, we keep looking at what updates are going to give most to new and existing players alike - but the roadmap is pretty fluid now.

"We'll continue operating our current work, then basically we're aiming to build on the experience we had so far from doing the past four titles on mobile, and doing something even more cool and successful next time - it's a really competitive exciting market right now and we're very happy to be part of it."

Crazy Taxi: City Rush is certainly heading in the right direction, and with the meter still running, Sega is set up to receive a hell of a lot of tips.

You can download Crazy Taxi: City Rush from the App Store here.