"Scotland's pedigree has endured, and the development scene is thriving"

4J Studios, Outplay and Tag Games fill us in on the game scene north of the wall 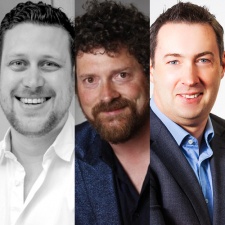 As part of our ongoing look at the state of games in the UK, we spoke to three of the bigger players in Scotland’s ambitious industry, and why developers should consider setting up in the small northern nation. Minecraft console developer 4J Studios, Indie giant Outplay Entertainment and licensed mobile games expert Tag Games tell us more

What's the development scene like in Scotland right now - both in terms of how companies are performing and the culture between studios?

Chris Van Der Kuyl, chairman, 4J Studios (pictured, centre): Game development in Scotland is in rude health at the moment. The recent news that Epic has acquired a couple of businesses here, committed to building a new studio in Edinburgh and hired David Jones to become their Global Head of eSports is a pretty good indication of the market’s confidence in Scotland as a location to make great games.

Luis de la Cámara, VP of global marketing, Outplay Entertainment (pictured, left): Scotland has a long legacy of games development, from Lemmings and GTA to Crackdown 3 and Red Dead Redemption 2. This pedigree has endured, and the development scene is thriving. Glasgow, Edinburgh, and in particular Dundee have been leading the growth of the industry in Scotland – acting as epicentres for creativity and passion for games.

The Scottish development community is a great mix of experienced game developers and younger game makers entering the industry for the first time and has a significant international component as well. In the same way, there is always a vibrant scene of grassroots game jams that engage professionals, students and hobbyists.

As the largest independent mobile games studio in the UK, Outplay is proud to help push mobile development and publishing both in Scotland and the UK as a whole. We are proud to be a part of a burgeoning Scottish industry.

The full story is on PCGamesInsider.biz

From Crackdown to mobile: Outplay's Phil Wilson on how to snag a job as vice president of operations