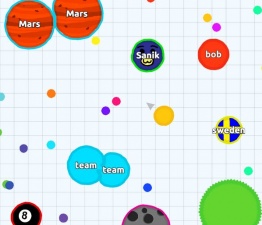 Having scored 7 million downloads in its first weekend without a single penny spent on UA, you’d be forgiven for thinking Miniclip’s Agar.io success lay in striking a midnight deal at crossroads.

Miniclip whipped the cloak off a mobile version of Agar.io on 7 July, and at the time of writing it’s already enjoyed well over 10 million downloads having snaffled the number one free app spot on iOS in the US and 28 other countries.

Chief commercial officer Saad Choudri, however, claims more orthodox methods of success – that is, a strategy that can be divided into “three main factors.”

Tricks of the trade

“Firstly, the game is already a viral success on web, with PewDiePie, Markiplier and others releasing a series of Let’s Plays,” says Choudri, referencing the face that Igar.io has been an online web browser game for some time.

“It’s also been really popular on Twitch. Word of mouth has definitely been a big driver of downloads as players have naturally taken to the App Store and Google Play to see if there’s an official mobile version of the game.”

“Secondly, Miniclip’s network of games - across mobile, web and social - gives us a huge existing playerbase.”

Indeed, Miniclip recently passed the 160 million MAU mark across its entire gaming portfolio. This community of players provides a catapult up the charts at the launch of a new game, helped along by the third element Choudri points out: a feature by Apple, Google, and Facebook.

However, this holy trinity of success is supplemented by a fourth factor – the communion wine that a sparked a community.

“On one of the key reasons for the success of the game is the core community that formed around the game on Reddit,” says Choudri.

“That was the spark for the web game. As Miniclip has a strong history of bringing top web games to mobile – it was a natural game for us.”

Keeping the spirit of the web version alive, Agar.io is currently free.

“We’ve been keen to make the ads integration as unobtrusive as possible and keep them out of the core game loop, so that you only see them when you’re between games” with ads shown after every fifth death.