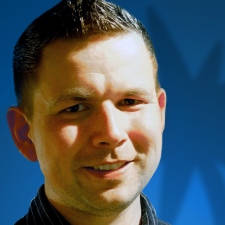 This week, we talk to Tuomas Erikoinen, the "main monkey" at Part Time Monkey, a micro studio based in Helsinki developing hyper-casual titles such as Breakout Ninja and the Ketchapp-published Space Frontier.

The developer is a finalist for Best Indie Developer at the Mobile Games Awards. The winner will be announced on January 23rd.

Tuomas Erikoinen: I come from a "professional" background, having drawn all the Angry Birds art at Rovio and founding Boomlagoon. Once I ultimately parted ways with Boomlagoon, I realised that my core strength and motivation was in very casual games, instead of midcore/hardcore where Boomlagoon was headed.

I pretty much wanted to do everything in almost an exact opposite way than what I had become accustomed to – now I get to develop and experiment as I go, instead of drowning myself in hundreds of pages of game design, monetisation and retention analysis, etcetera, before writing a single line of code.

Having done things my way for a bit more than two years now, I wouldn't have it any other way.

Why did you choose to focus on simple, hyper-casual games over more complex titles?

In all my efforts my main goal is to be as efficient as possible – that's where I get the most kicks from, for some reason. Simple casual games fit this mindset very well, as they often don’t have much metagame in them.

As a gamer I also tend to only play very casual games, such as all the Ketchapp stuff. Thankfully so, because it goes hand in hand with how I want to develop games (efficiently).

A typical day would be similar to any games company I think; you do either art, code, design or audio and you'll be done with it.

Visuals are one of the very few key ingredients that sell the game to Apple/Google.

However, I think the most exciting days are the ones where drastic decisions happen very rapidly, for example dumping a game I've worked on for a month and moving to something completely different. This happens quite often. Things can change quite fast as an indie, which is perfectly fine with the right mindset.

I had done close to zero programming before becoming an indie. So getting the ropes of that was difficult, but very rewarding. My background is in art and design, but now that I've tasted the sweet taste of programming, that's all I'd like to do.

I think it's fair in the sense that all the great games by indies that I know have gotten featured and the visibility they’ve deserved. Many of them have decent integration of ads too, so they should be making relatively good money with the visibility.

But then again, with no marketing or UA budget, you have to rely on featuring alone, which can be rough for some. For example, if your game is great, well implemented and everything, but your art is not that good, your chances are close to zero on succeeding.

I think that's a key issue many indies have: they come from a programming background, so they don't appreciate having good visuals. But the visuals are one of the very few key ingredients that sell the game to Apple/Google and then to users.

I tend to try not to sweat the little stuff. Over-designing and over-engineering can also kill productivity.

One is another publisher deal and the other one will be released by Part Time Monkey. The self-published one is a bit heavier content-wise than what Monkey has previously released and is set in Egypt B.C.

After spending so long as a one-man studio, why did you decide to bring on a "second monkey"?

I had worked for quite some time from home alone, which kind of crippled my social life. That would likely be reason number one, just to get to do this with someone else.

As said, I’m also now much more into programming than art and design, so I wanted to get someone who could lift much of the burden on that regard.

I was also lacking ideas, so I wanted to hear from someone else.

Similar than before; keep on doing whatever feels right, go day by day, see where the road takes me and all those kinds of clichés.

I don't really like to plan too far ahead, because I know plans tend to change so quickly, so I rather try to appreciate the volatility of all of it.

I'd keep on doing similar games than I'm doing right now, 'cause this is what I get the kicks from. However, I'd probably leave out all monetisation!

In a previous answer I mentioned focusing on art, especially if you come from a programming background.

I also tend to try not to sweat the little stuff. Over-designing and over-engineering can also kill productivity.

If you're not looking for investors or publishers, don't bother attending events or contacting media, just focus on getting the visibility from the platform holders.