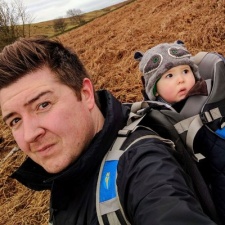 Travis Ryan: I’d been working in triple-A for some time, making big arcade games with the likes of SEGA, Rare and Sumo-Digital - OutRun2, Sonic & SEGA All-Stars Racing and Kinect Sports were all games where I had a lead creative role.

It was becoming more difficult to make the types of arcade games I love to play and make, we’d be packing all this content to justify a big box release for a dwindling audience.

The funny thing was, the audience wasn’t dwindling at all - now instead of playing in game centres, or on home consoles, everyone now has an arcade in their pocket!

So in 2013 I founded Dumpling to bring my passion for arcade games to a new audience. It was also shortly after the arrival of my first son, so obviously one massive life-changing experience just wasn’t enough.

What drew you to developing casual games like Dashy Crashy?

I’ve always had an affinity for arcade games since I was a kid and we had an Asteroids cab in our kitchen (long story).

My first ‘industry’ job was working in a game centre, cleaning arcade cabinets in the mornings to the wonderful sound of 100 attract modes singing for attention, and spending the rest of the day absorbing every genre imaginable; what games attracted who, what was the first interaction, what were the challenge points, did players come back and why, how did they socialise and compete - I absorbed it all, which I guess is how I learned to design games.

Arcade games have to be good to play - there’s very little to hide behind. I also love the implicit value of play in those days - you would give the game 50p and in return it would give you a bloody good time. These are principles I work to to this day.

So it was a lot of those values, combined with idea of streamlining arcade racers down to their core that inspired Dashy Crashy, and the possibilities new technology and design thinking afforded to make it relevant: physics for fun crashes and obstacles, procedural world and play creation, streamed UI; all of these things created a super addictive arcade snack.

At the time I also liked the idea of challenging monetisation, which led to us to establishing the ‘any purchase ad removal’ and ‘content rentals via ads’ methods.

Generally my days are spent wanting to play lots and lots of games, and not getting to play any at all.

Actually I’m not sure there is a ‘typical’ day as an indie, is there? That’s part of the appeal, each day you’re on a different part of the rollercoaster.

In the broadest sense, a typical day for me involves constantly evaluating what we’re making and how we can make it more fun or improve quality, tinkering with content, shepherding the team toward goals, chasing collaborators for content and working out the right time to channel our energy intro trying something new or wrapping something up.

Finding how best to monetise your game is a long, soul-searching conversation that every indie dev I know goes through.

Then there are days that involve sitting in a coffee shop, watching a rain-soaked world stroll idly by, while writing interviews for Pocket Gamer...

Being 100 per cent independent and focused on creating original IP, our challenge is always financial.

We boot-strapped Dashy Crashy and since its release our players have directly funded what we can and can’t do next, which is both liberating and terrifying in equal measure.

It keeps us lean and focused on what we can achieve and how best to build our content with what we’ve got, and it gives Dumpling a scrappiness and determination that I’d always like maintain to be honest.

As a space to create and release content to a mainstream audience, it’s never been better.

With so many tools, communities and distribution platforms, developers can concentrate on making cool stuff knowing that the platform and players are hungry for fresh new ideas, so it’s a great opportunity to make something new and get it out there.

Finding how best to monetise your game is a long, soul-searching conversation that every indie dev I know goes through, one that’s becoming more and more difficult to find a clear answer in a market that places very little - if any - value on play.

As an industry, we’ve gotten ourselves into a bit of a mess - we’ve gone from a generation of players actively paying 50p for a play of your arcade game to players not wanting to spend that same 50p to own the game outright.

With some push-back from developers as well as support from platform - for instance a standardised ‘demo’ solution would help the premium market considerably - I’m optimistic that it can swing back the other way.

Smash Tanks is multiplayer AR boardgame, best described as 'pool meets Advance Wars’ with a tonne of explosions. It’s $1.99 with no ads, no IAPs and no loot boxes.

Our goal was to create a new type of board game. Through an iOS camera players control an army of cartoonish tanks in a variety of environments that require you to move around to alter your view of the battlefield.

Pull back on the tanks like a pool cue to aim and then unleash them at your opponents or other obstacles, aiming for weak spots and triggering special weapons in a best-of-three match.

It’s easily one of the most fun projects I’ve worked on in over 20 years of tinkering, it was such a rapid and natural four months of development. Apple's ARKit just worked and developing directly with players at shows felt like we were discovering some kind of magic together.

Do you think more indies should be looking to develop for AR?

Absolutely. You get so few opportunities to be at the forefront of a new technology and help write the rulebook.

AR is an extremely powerful experience that we’re only just scratching the surface of; how we’re going to play with it and how it will enhance our understanding of our world are up all up for discovery.

It’s a great time to be writing the rules, but risky, with a lot of developers and publishers waiting for AR’s 'big moment’ - a sentiment echoed around PGC last week - it can feel a bit overwhelming being a tiny indie in this space, taking all of the commercial risks to push a technology knowing that the big boys will be sweeping in if you crack it.

But holistically, I see our role is to fail fast and find new things.

We’re so early in the cycle with the audience, we’ve a lot of work to do educating them on what AR actually is and why people should engage with it. Again, it’s down to us creators and the experiences we make, but also the platform and the message they put out so that we can solve this problem together.

We’re continuing to evolve Smash Tanks with new features, exploring new markets and new ways we can help players get into AR.

We’ve been a bit quiet with Dashy Crashy for a few months, but have bunch of cars and prototypes ready to tinker with and we’re considering a possible v3 that mixes up the formula to the same extent as we did with v2’s per car gameplay.

We’re also prototyping new games and ideas, both AR and mobile, so expect to see at least one new thing from Dumpling in 2018.

An unlimited budget? I fear that game would never be released!

Always consider your audience at every stage of development; invite them in, release small and build your games with them.

Obviously I love arcade games - fighting games in particular - and there’s plenty of room to reimagine and expand that formula.

But honestly, as I get older, I think less about creating things I want to play with and more about creating places I want to go to. So perhaps we’ll start to see a glimpse of that in the next couple of years.

If you’re looking to do this for a living, buckle up.

But sincerely, always consider your audience at every stage of development; invite them in, release small and build your games with them - these are all hard lessons we learnt developing and updating Dashy Crashy.

Being mindful of what you want to build (creative), what you should build (business) and what you can build (production) is also a vital part of knowing and working within your limitations.

But at the end of the day, have fun with the things that you’re making. Otherwise, what’s the point?