"That game you want to make? Make it." 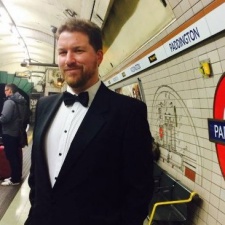 Kevin Beimers: I suppose it’s a combination of dumb luck and fate, with a hefty portion of “maybe this is where I was always meant to be".

My whole career has been in “computers” since university, usually riding the wave of whatever’s hot right now. I started a web design business back when the web was new and exciting. I worked in New York City during the rise of the dot coms. I was a blogger before blogger was a word (it was an “online travel journal” at the time).

University taught me how to program a dozen now-dead languages, but it was the creative side of computers that always got me excited.

I moved to Northern Ireland to become the art director of a digital animation company, and when that company turned its eye toward games - thanks to the appearance of the magical “iPhone” everyone’s talking about - I realised that everything I’d done up to that point had been leading up to games development and I didn’t even know it.

As for running my own company, that’s where the dumb luck and fate fall into place. I had created a pitch for a game/property called Schrödinger’s Cat and the pitch was somehow making the rounds in the world of animation/entertainment.

I got a call one day from a friend of a friend, who said he and a group were starting up a seed fund for game development, my pitch had rolled across their desk, and asked would I like to make it? Hell yes. About a month later I had funds and started hiring. Who says funding is hard to find?

To be honest, Italic Pig has been in the middle of something big and exciting for a long time, besides our current development, so a lot of my time these days gets eaten up by boring, business-running shit – you know, the stuff that keeps the lights on – as well as putting out fires when I do get a chance to cast my eye on the shop floor.

But, if you were to ask me what are my favourite days as an indie, it's the day when I jump around over several developments, solve many little issues in different categories, create a few characters, write a bit of dialogue, playtest a bit of a game, make a few judgement calls on sounds, jot down a half-page on a nugget of a new idea. Basically, the days that feel like I’m actually involved in the development of a game.

And of course, that day would end with an industry awards night.

Aside from the boring business-running I mentioned earlier, I’d say my biggest personal challenge is self-editing. I am a notorious feature creeper and I’m famous for “following butterflies”.

It’s not about being rich – it’s about having the means to keep doing what we love, on a bigger scale.

This can be a good thing in the right circumstances – early development is my jam – but I’m constantly putting myself at risk of being in perpetual development, because there’s always a way to make it better.

But, yeah, sooner of later you do have to ship. At least, that’s what people keep telling me.

How do you define "success"?

As an indie, if the last game’s made enough money to make another one, I’m a success. If I’ve got the funds to keep my employees fed, whether that’s one-off project funding, then I’m a success. When I run into a stranger that has played one of my games, I feel like a success.

My ultimate level of success would be to be self-sustaining and multi-faceted. I’d love for something I’ve created to go gangbusters to the point where I’ve got the means to put several parallel teams together to pursue all those wacky offbeat ideas that come at 3am.

It’s not about being rich – it’s about having the means to keep doing what we love, on a bigger scale.

It’s hellishly competitive and hellishly frightening, and no one in their right mind should even attempt it because the data is against them.

Seriously, quit now and go work as a timber joiner or dentist or welder. You know, jobs that are stable and useful after the apocalypse.

Are the quitters gone? Good.

Thankfully, no indie developer I know is in his/her right mind. That’s why we do this.

Then you’ve got the indies. Indies say: “fuck that data, I’m making something fun”. Despite all trends and evidence to the contrary, they release this random, wacky, offbeat thing that’s like nothing the world has ever seen.

Sure, there’s a lot of flops, but that one gorgeous gem of an idea that nobody saw coming occasionally rises to the top - and the data changes behind it.

Six months later, there’s a new genre and a thousand clones, and the stupidly huge companies are pretending like they invented the thing. But they didn’t. I guarantee you, an indie did.

I’m not excited about VR, but I think I want to be.

You're currently exploring virtual reality. What attracted you to the technology?

If I can be honest, and I might get burned for saying it, nothing. I’m not excited about VR, but I think I want to be.

The fact is, I’ve not yet had a uniquely VR experience that has made me say: "This! This is why VR is here to stay".

So, last year when Creative Europe’s call for narrative-driven games came up again, our team said “what would get us excited about VR?”

We wrote a VR-specific big adventure concept game, on paper, that we felt would genuinely make us want to put on the headset for hours at a time, for days at a stretch. And we were successful.

So now, Italic Pig has a large sack of fun time VR play money to make a grand, hilarious, experimental adventure in a brand new platform. Let the fun begin!

Our most recent game is still the one game we’ve been sculpting tirelessly for two years, Mona Lisa. In a sentence, it’s Guitar Hero meets Fruit Ninja for Renaissance art. Yes, really.

If you want to find out more about it I suggest checking out previous PocketGamer articles about it, like where Mona Lisa won the Very Big Indie Pitch back in January 2017, or where it won the Big Indie Awards in Shenzhen, China last December. Luckily for us, there’s a few.

All in all, it’s been an extremely exciting journey, and, despite the fact that the game has still not been released, last year’s exploits have amassed a large collection of development awards and nominations, put us on the verge of signing an extremely exciting deal in the run up to launch, and earned our tiny team Northern Ireland’s Studio of the Year. 2018 is going to be very exciting.

My business plan expands on all of these points in greater detail.

Just make it. That game you want to make? Make it.

As I mentioned above, I’m a terrible self-editor. With unlimited budget, I’d gladly chase unicorns all over Development Land, making a collection of whimsical jaunts and probably never releasing any of them.

I would gladly live in perpetual early development. My staff would temporarily enjoy the freedom of no deadlines and eventually move on due to lack of closure and fulfillment. But I would be a happy man.

Just make it. That game you want to make? Make it. Don’t know how? Ask Youtube & StackOverflow, it’s free. Can’t draw? Make it with squares. Roll with your limitations, not against them. Someone tells you it’s stupid? Ask someone else.

As I said earlier, there are a million reasons why your indie idea will fail. So, you have two choices: Abandon your idea, get a stable job in a retail outlet, maybe become assistant manager one day. Or make that thing.

Please, indies, from the bottom of my heart, fuck the data. Keep making the wacky left-field things you make, the things that nobody else is doing because the venture capitalist didn’t get it and the shareholders didn’t vote for it and the focus market testing group scored less than a 62.5 per cent on the "funability" threshold.

Make your thing. You could be the one that changes the data.