Indie Spotlight: Arcane Circus’s Molly Heady-Carroll on the accessibility of the mobile market and finding the balance in life

"Defining what you want and don’t want is vital to creating a clear plan for yourself to reaching your goals. This definition can be surprisingly different for each person" 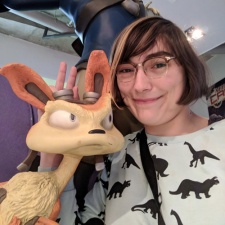 This week, we talk to Molly Heady-Carroll, co-founder and lead artist of Arcane Circus, the developer behind Crap! I'm Broke: Out of Pocket and Kimono & Chibby Chan Save The World.

Molly Heady-Carroll: I was told about the Indie Scene by Jan-Willem Nijman and Rami Ismail from Vlambeer, who were in the same college class as Arcane Circus co-founder Erik van Wace. I instantly knew I had found my people and started creating weird games with Erik in our free time at college, some of which we sold on FGL - rest in peace...

During this time, we created games like Hodag Snag and the original Crap! I’m Broke. A few years later, I received a grant from the Global Game Jam for my contribution to the organisation.

While I was there, I met PR/Marketing Company Novy Unlimited. Their founders Jeannie and Luis convinced us to make Crap! I’m Broke into a mobile game. They were totally right: we haven’t looked back since.

Wake up at 2pm, make coffee and swear under my breath that I’m up too late, watch YouTube and eat breakfast, check emails, work until 4am, promise to myself that I will get up at 9am tomorrow, repeat.

That’s most days anyway, a lot of development is just working, working, working with occasional moments of glory: a conference, a showcase, a meeting where a fantastic new idea is conjured up. That kind of thing.

There are quite a lot of local meetups in the Netherlands too, I love those. Not only is it fun to hang out with friends, many of the best developments in our games came from talking to other devs and getting a new perspective on the problems we were encountering.

Erik and I are only two people doing everything. On top of this, we work part-time to financially support ourselves. In other words: too many tasks and limited time to dedicate to each of them. It’s very frustrating!

We are now building towards working full-time for Arcane Circus and getting other people involved with the company to alleviate some of the workload.

An important pursuit for me is pushing my artistic skills further with each new project.

I try to define a clear goal for what I want to learn at the beginning of a project. That way I can always get value out of a venture.

What a time to be a developer! The mobile audience is massive and the platforms are so accessible.

The touch-based mobile platform is also relatively new, so there is still a lot of room for experimentation. I think some of the most interesting developments in games are happening on mobile right now.

Our first commercial release, Crap! I’m Broke, Out of Pocket came out in October 2016 for iOS and Android. Crap! I’m Broke is a hectic life management game with a Cubist art style where you do mini-game style jobs - like scrubbing dishes and flipping burgers - to avoid eviction and keep starvation at bay. It is based on our experiences and the experiences of our acquaintances with part-time work and paying bills.

We didn’t really know what to expect with the release of the game because it was our first rodeo. It was received better than we ever could have imagined.

My proudest moment was when Google displayed the game at the Saatchi Gallery in London in 2017. That was wild. How many modern artists dream of having their work shown at the gallery that launched the careers of Damien Hirst and Tracey Emin?

We just moved Arcane Circus out of our houses and into an external office. Once we are done setting that up, we are going to continue developing our next title, a Kaiju-themed card game.

Charles Zembillas - character designer for Crash Bandicoot, Jak and Daxter, and Spyro the Dragon - has been helping us as our creative consultant on the project. It’s been an honour to work with him and The Animation Academy. Both Erik and I love Jak, Crash and Spyro.

In fact, Spyro is one of the big reasons Erik wanted to pursue a career in games. Charles’ consultation is pushing the project to a level we could never have achieved without him.

There’s a video of him going over Team Cute’s design on The Animation Academy’s Youtube.

How do you balance your freelance work and development on your own titles?

I’m one of the lucky ones. I have managed to sustain myself, just barely, through freelance for the last five years.

A big advantage of being a freelancer is I can set my own hours. I have set days where I freelance and set days where I work on my own stuff. If we get invited to an event, I can easily move my schedule around and attend to represent Arcane Circus.

I’m one of the lucky ones. I have managed to sustain myself, just barely, through freelance for the last five years. That doesn’t mean it is easy though as a ton of time has to go into finding new jobs/worrying if anyone will reply.

It beats other part-time work though, not only does working freelance on other game projects allow me to keep my game art skills sharp, I get really anxious when I have to interact with people and pretend to be a normal person in real life. Working over the internet suits my personality much better. I’m glad I live in an age where it’s possible.

I would make exactly the same games I make now. I would use the money to collaborate with all the incredible artists and developers I know, especially the ones who deserve more recognition.

Also, the games would come out much, much faster and would all be released for free.

Know what 'making it' is to you. Defining what you want and don’t want is vital to creating a clear plan for yourself to reaching your goals. This definition can be surprisingly different for each person.

Developer A may find tremendous joy nurturing the growth of their company, while Developer B’s highest priority may be creating an artistically profound game that expresses a personal message.

For Developer A, creating small, short-term projects with high market viability may be a good direction, while Developer B may be better off taking a long time crafting the desired experience for the player to reflect the game’s meaning.

Also, never forget that a sense of 'making it' is in your head and those goalposts will constantly move ahead throughout your life. When I started developing games, I was over the moon if someone left a positive comment on my games on the Game Maker forums.

When we started developing Crap! I’m Broke: Out of Pocket, my highest priority was to communicate the struggle of work/life balance. Now, my goal is to get Arcane Circus financially self-sufficient and work there full-time.

Also, pat yourself on the back when you accomplish a goal that you set for yourself from the start. It’s too easy to downplay your accomplishments and convince yourself that it is no big deal. Enjoy those victories. Otherwise, you will never truly feel like you have 'made it'.

Should indie developers release their games in Asia?

Is there any room for indie games developers to get in on the battle royale trend?