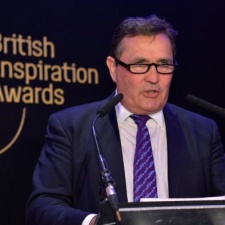 Yarnton has been involved in the games industry for over 30 years, 17 of those years as a senior manager at Nintendo both in Australia and the UK.

Gfinity recently opened in Australia and has run Esports tournaments in China, France, USA and Mexico. Yarnton is currently the founder and COO of Edge Esports, which is developing smart contracts and analytics focused on the esports industry.

David Yarnton: Edge plans to reinvent the contract, tame the Wild West of esports and revolutionise the legal industry.

First, we connect gamers, teams, leagues, influencers and brands. Then we disrupt a $500 million industry with our Edge Hybrid Smart Contracts and intuitive platform.

We choose esports and gaming because:

We are providing players a 'path to pro'.

Even though I have a title we aren't big on siloing our task. As a small start-up everyone has involvement in all aspects of the business which is great as there is never a dull moment.

I've been in the games industry for over 30 years and when I started I just wanted to be able to play games, especially Donkey Kong and Mario.

Mobile and esports are continuing to grow at breakneck speeds.

Don't be narrow in your aspirations, be prepared to have a go at anything. Once you get your foot in the door and work hard, opportunities will open up.

It's amazing as to how the industry keeps growing, evolving and developing with so many exciting games continuing to be released that people are always surprised by.

Mobile and esports are continuing to grow at breakneck speeds. What people thought wasn't possible on handheld continues to surprise me. We will see these areas continue to grow and gaining wider mainstream acceptance.

Obviously the tech has developed greatly to provide richer and more in-depth experiences for the player but what makes a great game still has the same DNA from years ago. I could pick-up GoldenEye on the Nintendo 64 and still play a great game even though some people would look at the graphics with some disdain compared to today's products.

Every time I attend I always learn something new. Last year I became a Guns of Boom fan, who knows what I will discover in 2019?