“Developers need a way to simplify the process of coding for very complicated game concepts, while also allowing for ease of trade regardless of the kind of digital asset” 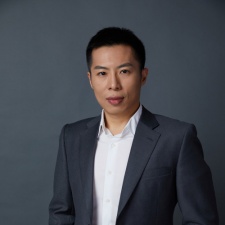 If there’s anything more challenging than launching a successful game on mobile, it’s piecing it together during the design phase.

It’s with that in mind that we ought to mete out some respect for those attempting to do so while incorporating blockchain technology.

During our time at Blockchain Gamer Connects London, developers from all scales were in consensus about the need for effective all-in-one platforms. Not only to create a streamlined environment for game design but also to allow for intuitive player experiences.

This is where we began a conversation with both Richard Yang (Pictured, main) and Caterina Zhang. Working as the co-founder and as an executive committee member respectively for Cocos-BCX, the inclusion of this platform into the blockchain space brings with it decades of experience and an understanding of what both players and developers need.

Cocos-BCX – A Heritage in game design

Like major developers and figures stepping into the blockchain, Coco’s brings with it a heritage in mainstream game development.

With its earlier platform, Cocos2s-x, shedding some light on what is important to developers and gamers.

“For some added context: the Cocos2d-x platform was originally developed back in 2009,” Co-founder, Richard Yang explains.

“The purpose of this middleware was to make it easier for programmers to deploy on different platforms and support different systems. For example; for iOS or Android, for quick accessibility by players.”

One of the immediate net positives for the Cocos team, in starting its ‘Blockchain Expedition’ (BCX) is that it has managed to gain a significant mainstream following; boasting a total user-base of over 1.3 million that have already demonstrated a burgeoning interest in the blockchain.

“Currently, we also boast over a decade of experience within the gaming industry,” Yang argues.

Developers need a way to simplify the process of coding for very complicated game concepts, while also allowing for ease of trade regardless of the kind of digital asset

“[O]ur understanding of what it needs today is that its developers need a way to simplify the process of coding for very complicated game concepts, while also allowing for ease of trade regardless of the kind of digital asset.”

Yang puts forward the platform of Cocos-BCX with a concise statement: “What we want to do is help more developers to put the advantages of blockchain technology to use in their games.”

This gets to the crux of what development platforms are trying to do for developers now.

But, to suggest that Cocos is on its own when it comes to providing an all-in-one development system would be untrue. With the likes of TRON Arcade, Loom, Enjin and XMAX being just some of Coco’s counterparts.

While other, more centralised ecosystems would inevitably result in these platforms competing. Yang and Caterina Zhang see Cocos as part of a collaborative ecosystem and strives to be a provider and guide for developers.

“We think beyond blockchain apps to a broader ecosystem; we don’t think that Cocos is the only solution; programmers create their systems/games according to their unique economic paradigms.”

Along with the foreseeable challenges that come along with blockchain integration, Cocos-BCX provides a way for the very language of coding to be simplified to a degree.

“With our system, users will be able to code using, Java, Python, C++, which we can then translate over to smart contracts, allowing them to be immediately applicable in the face of different standards.”

When asked to expand upon this feature, Cocos’ platform includes a way of taking these various languages of code, simplifying them and making them usable across different chains.

If not out of coincidence, but out of a feeling of mutual admiration, Yang made it clear that one of the first solutions that it reached out to was, in fact, Loom.

“We are also one of the first providers of LOOM SDK within our development system,” Yang continues.

“We’ve been a big fan of their initiative for some time, and we jumped at the chance to integrate their solution into our platform.”

Loom is one of a growing number of blockchain solutions that Cocos-BCX leverages for developers.

Allowing them to have full autonomy over what kind of blockchain would better suit the game they want to make.

Currently, the platform has integration for Loom, Ontology, Zilliqa and TRON. While these are under varying time-frames for development, it goes to show the scale of this platform.

Much like Enjin, in this sort of regard, the platform utilises its digital asset solution.

It refers to this as its ‘Non-Homogenous Asset Solution’ (NHAS-1808). The NHAS-1808, once added to various blockchains, like TRON (TRX-1808), or Ontology (ONT-1808), they offer a greater level of asset ownership, as well as interoperability between chains.

“We built and operate the Cocos-BCX platform upon these fundamental principles. We believe in an open ecosystem, which is what we stood for with Cocos2d-x.

"And with that openness, we believe that blockchain game development and its user-base should be more open.

"We want to a provide a learning curve for new developers, and that’s what we intend to provide from a top-down level.”