Interview: Why Moonshine Studios is proud to launch Get Packed first on Google Stadia

"Stadia has been a natural fit for our development pipeline" 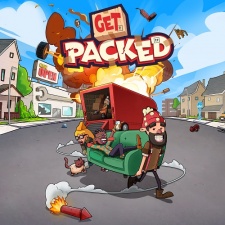 Nearly six months on since the launch of Google Stadia and it has been a bit of a turbulent time for the cloud streaming service. A slow rollout of games and features, reported issues with financial incentives among developers, and a lack of communication has left the platform in troubled waters.

However, a decision to make Stadia free for two months while the majority of the world resides at home has yielded some positive news. Following the announcement, data has shown that 225,000 downloads of the Stadia mobile app were made globally across the App Store and Google Play, representing a 50 per cent increase over the number of installs made during its launch week.

Taking all this into consideration, this could an optimum moment to release on Stadia. Cornwall-based independent games developer Moonshine Studios certainly believes so, and has been working with Google on a new launch exclusive, Get Packed.

To find out more, we spoke to Moonshine Studios co-founder and 3D artist Callum Taylor regarding the development of the couch co-op party game and why the indie studio is proud to launch on Stadia first.

PocketGamer.biz: Can you tell us about Get Packed?

Callum Taylor: Get Packed is a physics-based co-op removals game for one to four players. You and your friends assume the role of Last Ditch Removals in the town of Ditchlington. Last Ditch Removals has been tasked with helping all the citizens relocate after the town is taken over by the evil Industrial Salt Corporation.

The aim of each level is to grab everything you can from a particular house or business and cram it all into your van. As the story progresses, the environments and scenarios get steadily more ridiculous.

Stadia has been a natural fit for our development pipeline and we feel it's the best opportunity for our game to get to market.

Why do you think launching on Stadia was the right choice?

Get Packed is a surprisingly demanding game from a technical point of view; there's a lot going on under the hood in any physics-based multiplayer game, and Stadia's tech has made the development process a lot more straightforward.

Stadia also broadens our accessibility for players, allowing us to reach a whole new audience and felt like a great opportunity for the game to grow an active community. With the ability to play Get Packed across a bunch of different devices with only an internet connection, we're really excited to push co-op games to the next level.

Stadia has been a natural fit for our development pipeline and we feel it's the best opportunity for our game to get to market.

Do you still think this is still the right option considering the reported low number of units sold with Google not reporting on the numbers itself?

Working with Google was undeniably the best opportunity for the game and our studio. Stadia has offered a great deal of support during development and offered some incredible marketing opportunities. For a brand-new indie studio like ours, we simply couldn't have achieved this level of awareness for our first title without the support of Stadia and our publisher.

Get Packed being a Stadia exclusive so early in its lifespan still feels remarkable. We're incredibly proud to be First on Stadia and can't wait for the passionate Stadia community to play it.

How did you find developing for the Stadia platform? Any challenges in particular?

It's been an incredibly smooth process. Unity has fantastic integration with Stadia, so the development has been similar to a standard console title. However, thanks to the power of Stadia, we've been able to push the graphics and gameplay that much further.

During early development pre-Stadia, we encountered a number of challenges, particularly regarding performance, because we were dealing with so many unknowns. Get Packed is played from a birds-eye perspective and often you can see the entire map.

This is a huge area to render, exacerbated by the sheer amount of manipulatable physics objects. Knowing the specifications of the target hardware was incredibly useful, allowing us to pack each area to its limit without affecting performance.

Accurate lighting was another early challenge. Baking the lighting would've allowed for faster render times, but with all the moveable elements it became clear that real-time lighting was the only viable solution.

Even then, it was tricky balancing the requirements of the shadow system with the destructible meshes and explosions. It looks great, but that level of chaos began to push the hardware. But these limitations pretty much evaporated when we focused on Stadia development thanks to the power of the servers.

Can you tell us about the partnership between you and Google to launch the game exclusively on the platform?

The partnership with Google actually came about thanks to our publishers, Coatsink. Coatsink's CEO Tom Beardsmore was introduced to the Google Stadia team and showcased a few of Coatsink's upcoming publisher titles, and they instantly fell in love with Get Packed.

Since then, while Stadia was always available to offer technical support, they've been entirely hands-off from a design perspective, allowing us to wholly retain our creative vision.

Their involvement has mostly surrounded platformer integration: getting the game up and running on their new tech, working closely with the programming team at Coatsink. Both the process and platform has felt like a very natural fit for Get Packed.

We all had prior experience making games but none of us had met before, so it felt like a mad experiment going all-in on a brand-new studio.

Any interesting stories regarding the development of the game?

The Stadia opportunity was a seismic shift in terms of our planned development, launch, marketing - everything. Almost overnight we had to shift gears and adapt to this frankly amazing opportunity.

But even before then, the inception and development of the first prototype was pretty unconventional. The team at Moonshine met in 2017 through the Launchpad Incubation Program in Cornwall; while studying entrepreneurship, we were grouped together to start a company. We all had prior experience making games but none of us had met before, so it felt like a mad experiment going all-in on a brand-new studio.

The idea for a removals-based game first came about after I helped a friend move out of their university dorm, hauling all their knackered old furniture and squashing it into their tiny clown car. From that, we set about making a packing-based multiplayer puzzle game, similar to Tetris, but quickly discovered we were having far more fun distracting and messing with each other's towers. It was then we decided to shift to a more chaotic, literal take on removals. From this, Get Packed was born.

And inevitably, while developing a physics-based comedy game, we saw some weird and hilarious game behaviour. Cars driving through buildings, fireworks randomly spawning, the characters' spaghetti arms warping and flying across the map. We squashed the bugs, but part of the fun of a physics-based comedy game is the unexpected, hilarious, often serendipitous results of play. Hopefully, players come away with their own memorable stories to tell.

A number of developers have been quoted as saying that there is a "lack of financial incentives" from Google and this is hurting the game development for the Stadia platform? Can you tell us about your experience and if you have found this to be the case?

We’ve had a huge amount of support from the Stadia team during development – tech support, marketing, showcases… We're a small studio and just seeing Get Packed featured on Stadia's first E3 connect was a massive thrill.

We obviously can't speak for other developers as they evaluate options from the outside but for us, working with Stadia has been an entirely positive experience.

This is Moonshine’s first title, what’s next for the studio?

Right now, we’re tunnel-visioned on Get Packed's post-launch content -- watch this space! After that... while we're never short on ideas, we'll likely take some time to evaluate the landscape and see which genres are underrepresented and that we believe we can do justice. But a couple of things are certain: we'll always endeavour to make fun and exciting games, and maintain our friendly indie work culture.