"Companies big and small need to proactively seek out the diverse talent they desire to have." 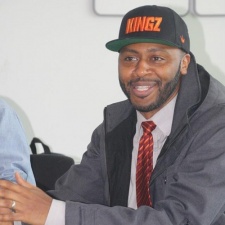 This week we spoke with Konsole Kingz founder Cj Peters about starting out in games as a minority and why representation matters in the industry.

I think companies big and small need to proactively seek out the diverse talent they desire to have.

Cj Peters: I wear many hats but if I had to narrow it down, I would say my main roles are game producer and UX designer.

Coming from a background of making games personalisation assets for consoles and being around the console landscape, mobile games offered an overall better price point from a development and resources standpoint.

Before diving into tools, I would 100 per cent recommend people to network, network, network. Attend any game development events where you can meet or talk to people that are making games. This will give you a much-needed insight on all facets of the games industry.

Join organisations as well. After that, I suggest learning industry-standard tools and languages such as Unity - even if you are not a developer.

At Louisiana State University, I studied Information Systems and at the Art Institute of Atlanta, I studied graphic design. These things combined helped me to understand how to create and produce technical projects with a team, as well as how to communicate with developers and designers.

Aside from that core knowledge I received from high learning institutions, my interning at a game studio really helped to hone and apply my skills to the games industry.

I think companies big and small need to proactively seek out the diverse talent they desire to have. The talent is out there, yet a lot of the time the talent doesn't have the resources to communicate with the correct stakeholders.

The first biggest challenge I encountered when first deciding to join games was educating people in the industry on what it was I was actually trying to accomplish. I created my company, Konsole Kingz, clearly out of necessity due to the lack of representation.

None of the faces I saw in games media looked like me nor talked games the way I did culturally. It literally took me going to E3 and CES three years in a row just to get people to take me seriously. After finally speaking to the 'right' contact at Microsoft, it took me another year to finally convince the firm to let Konsole Kingz create content for Xbox Live.

If there were other things that happened in the games industry as a response to #BlackLivesMatter, they were not effective enough to reach me.

I think the simple answer to this question is what led me to form my company – representation. Younger people of colour need to see and learn about people of colour in games, so they can see that it is possible.

This has to go hand-in-hand with the STEM and STEAM initiatives that are taking place in educational institutions, because although gaming is fun and entertaining, it's also highly technical and creative. Our young people of colour must be taught and put on this early in their developmental years.

Recruiters can only do what the clients ask of them, so many companies have to change the culture they are creating or fostering. Once that happens, the recruiting should follow suit.

I think the #BlackLivesMatters campaigns and Covid-19 have made companies and people, in general, more aware of what has been going on for years within the Black community. Specifically, I point out Covid-19 because it has literally made the US shut down.

When people are not in their normal life routine, they have more time to really observe what is going on around them. The George Floyd murder happened during that time and unfortunately became the straw that broke the camel's back.

Know what you are getting into and study the landscape so you know how to function in it or how to short cut around it. Black and Brown people are a minority in the games so that itself tells you what issues come along with that.

POC in Mobile: Chase Bethea's journey as a game composer and the many benefits of game jams