"To be honest, we greatly underestimated the amount of work needed to be done." 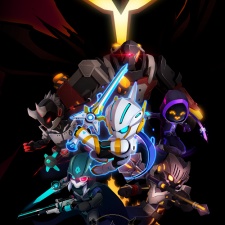 This week, we spoke to FairPlay Studios president Thanisorn Boonsoong about the making of the Mega Man inspired Fallen Knight and why the studio is looking to put the Thai industry on the map.

PocketGamer.biz: Can you start off by telling us about Fallen Knight?

Thanisorn Boonsoong: Fallen Knight is a side-scrolling action-platformer heavily inspired by the Mega Man series. We made a spin-off of King Arthur’s tale by throwing the characters and story elements into a sci-fi futuristic world that revolves around a newly built lore to create some familiarity with modern civilisation.

Development took a little under a year (roughly 10 months) and the initial team had five people working on the game.

Players play as a descendant of the great Sir Lancelot and are tasked with saving the world of Neo- Utopia from a terrorist organisation known as the Purge, facing off against six unique enemy heroes with a dark past of their own. Little do they know that there is more than meets the eye and the undercurrents disrupting the peace of Neo-Utopia is not as straightforward as it seems.

Players are able to customise their gaming experience via Lancelot’s skills after unlocking upgrades and honour points from in-game progression. Players are rewarded even more honour points by parrying and disarming opponents rather than killing them.

Expect a Dark Souls-esque challenging experience coupled with a fast-paced sword action gameplay that will punish players for every little mistake, and reward them generously with every victory.

As the first game of our newly formed studio, we actually started off the conceptualisation process with various challenges to tackle rather than various game ideas to explore. In this case, we saw the challenges in building an action platformer on mobile that delivers a seamless and enjoyable experience to emulate the sensation of playing on a console. That was the overarching directive of the game.

From then on, we started to explore western mythology and fell in love with King Arthur’s tale due to its diverse and story-rich lore that has so many elements to explore. We think most people in the world know of the tale and despite its numerous adaptations into pop culture. We always find a certain charm to it and it's never boring. That being the case, we decided to take a shot at our adaptation of the tale by bringing it into a futuristic setting.

Development took a little under a year (roughly 10 months) and the initial team had five people working on the game. During the latter stages of development, we added three more people to bolster our ranks and elevate the quality of the game into what it is today.

Our biggest challenge was probably time versus quality. To be honest, we greatly underestimated the amount of work needed to be done. We actually planned to make the game in three to four months but when it came down to the actual execution and output, we weren’t the least bit happy about the quality that came out at the end of the initial development period.

The thought of making a hardcore game pegged to a quality benchmark being Mega Man 11 in three to four months? We definitely bit off more than we can chew.

Therefore, we extended the development period to no more than a year and spent all our time and effort into enriching the world of Fallen Knight. This included increasing the quality of the game and ensuring that you’re able to get that console-esque experience we were aiming for.

Probably post-launch. More specifically the most recent 1.9.6 patch update. To be fair, this question is a tough one - even our team is quite split about the answer here. The release of patch 1.9.6 introduced a casual mode which allowed us to reach more players and receive a great influx of positive feedback, making all our efforts worth it.

It was not so much of a feeling, as it was an opportunity born from being at the right place at the right time. It really was just a coincidence that we finished the first version of Fallen Knight and submitted it to Apple for a shot to get featured at launch.

How did the partnership with Apple come about?

Same as above. It was somewhat of a coincidence that we finished the game and submitted it just in time for Apple’s plan to launch Apple Arcade. If I were to take a shot at guessing… maybe Apple saw and appreciated the challenge of making this type of game on mobile and it also suited the concept of an arcade title.

We have always aimed to launch on the App store and deepen our relationship with Apple over time, but with the opportunity of Apple Arcade, our hopes were served to us on a silver platter. It was an easy decision to enter into a partnership with one of the largest companies on Earth for its new product launch when it’s our company’s first game in our first year after formation.

Fortunately for us, Thailand was not hit as hard by the pandemic relative to other places around the world. There was definitely a short period of time during the pandemic that impacted our development: setting up and getting accustomed to work-from-home procedures, establishing new lines of communication, and dealing with a new work environment all affected productivity. Luckily, the business of games does not necessarily depend on much physical human interaction to generate productivity.

We are taking a lighter twist on things with two extremely quirky and exciting mobile and console projects gearing up for both a 2020 and 2021 release.

There were many tools out there such as Google Hangouts, Zoom and Discord that helped facilitate our needs for meetings or occasions where we have to see each other’s screens. To that end, we only spent a short two to three weeks working from home since the Covid-19 situation in Thailand quickly came under control, and we swiftly moved back into the office with some new hygiene measures.

Unfortunately, we did not soft launch the game due to several reasons. We did have a small beta test before the launch and to share some of the insights from that: we found out that our initial designs were impossible to beat and the game wasn’t optimised for mobile, although it was always our intention.

There were many critical and extremely useful feedback that we used to improve the game. There were also some areas where we decided to be a bit more stubborn on, which played to our advantage sometimes but less often than not.

No complaints at all! I mean it definitely could be better as with all things but for the game to come this far and create so many new opportunities for our young company, I’ve got to say I’m very happy with Fallen Knight.

It’s been a gruelling test for our team to adapt, motivate, and surge forth amidst the mixed reviews and critical feedback, but we’ve retained the passion and love for this industry all throughout the process and came out of it much stronger. You can certainly look forward to our next titles that will build upon our previous mistakes and lessons learned.

We think Fallen Knight tends to attract players who are fans of the Mega Man franchise - players who get a nostalgic feeling while playing the game that’s reminiscent of the old-school action platformers.

As we are only available on Apple Arcade, most of our players are in the US. However, we also have a good number of players from Canada, the UK, Russia, Brazil and other parts of Europe. We will be releasing on Steam, PlayStation, Xbox and Nintendo Switch in Q1 2021 and hope that will bring Fallen Knight to more devices around the world.

We are continuously improving the game by listening to our players through all our social channels and store reviews. You can expect our commitment to subsequent patch updates that fine-tunes and improves the gameplay experience.

As for the bigger updates, we can’t share that right now, but you can definitely expect some game-changing updates coming soon. You can join our community via any of our social channels to gain a sneak peek before anyone else.

This is probably the first time we are sharing this, so this is somewhat of a super-exclusive sneak peek (it is not even on our website yet)! We are taking a lighter twist on things with two extremely quirky and exciting mobile and console projects gearing up for both a 2020 and 2021 release.

Our mobile project is an endless runner with a hilarious comical twist to it. Our PC and console project is our more ambitious couch co-op that is sure to give you numerous entertaining memories with your friends. Expect to see a lighter, brighter, more casual side of FairPlay Studios in our upcoming titles.