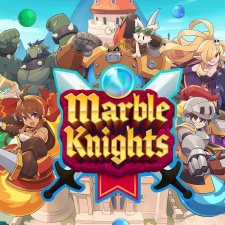 The process of creating a game is difficult, long, and often stressful.

And in the current market, that's only the first step to making the title succeed.

This week, we spoke with Wayforward Technologies game director Austin Ivansmith about the development and launch of Marble Knights, a fantasy multiplayer adventure designed for Apple Arcade.

PocketGamer.biz: Where did the initial idea for Marble Knights come from?

Historically as a studio, we were already a fan of arcade-style trackball games like Centipede and Crystal Castles, and we even made our own version of a trackball game on the Nintendo DS with Galactic Taz-Ball, but this new one would include four-player elements reminiscent of The Legend of Zelda: Four Swords.

Super Monkey Ball is a hallmark of party-game fun, especially since it’s a spherical-player-physics-based game - it was serendipity.

It was originally called Marble Quest: Knights of the Round and was meant to live alongside Watch Quest for Apple Watch, which was also in the idea phase.

The project was shelved for several years until we heard about Apple Arcade, which seemed like a good time to try again. Apple responded positively to the concept and we started on the full design and fleshed out the brand.

We worked with Studio Trigger on the animated intro that helped to solidify the characters and set the tone. Meanwhile, the development team began adapting the high-level concepts into functional gameplay, eventually driving the daily development of the title.

Development on Marble Knights kicked off in August of 2018.

The core team of programmers, artists, designers and leads was around 12 people on average throughout 18 months of development.

What inspirations did Marble Knights draw from?

The biggest inspirations for Marble Knights were The Legend of Zelda: Four Swords Adventures, Marble Madness, and Super Monkey Ball.

The game was first and foremost an adventure game where players needed to work together and solve puzzles to progress through the quest. But it also needed to be a fun single-player experience, so instead of forcing the player to control four characters in a formation like Zelda, we opted to have puzzles that could be solved by a solo player.

From the outset, the game was intended to be an awesome couch-party experience, whether you were playing through Quest Mode, or if you wanted to play any of the various mini-games. Super Monkey Ball is a hallmark of party-game fun, especially since it’s a spherical-player-physics-based game - it was serendipity.

We went back through our favourite Monkey Ball mini-games to derive inspiration from them, but also looked at other classic party games like NBA Jam, Super Bomberman, Super Smash Bros., Fuzion Frenzy and even Tron.

This is the third game WayForward has produced for Apple Arcade; does this mean the original partnership with Apple was a success?

Marble Knights was actually one of three titles originally planned for Apple Arcade (the other two being Shantae and the Seven Sirens and Spidersaurs).

It was in development from the get-go, alongside the other two, but it happened to come out later. That said, I think the partnership was a success.

Walk us through the steps of how you approach partnering with Apple after the first experience?

There are still some updates for us to hit with Marble Knights, so we want to be sure we have fulfilled our obligations before we get too ahead of ourselves.

But Apple has been a great partner and we would love the opportunity to make more awesome games for their service.

The pandemic hit our team pretty hard. Coming into the office in March 2020, there was a feeling in the air that something was different. For weeks we had been monitoring what was going on in the world, wondering if we would be affected.

We still have plenty of fans who aren’t subscribers to the service, so there is still an interest in seeing the game and brand move forward

I feel really fortunate to have my job and know how WayForward prioritised the safety of its workers. WayForward trusted everyone to set up workstations from their homes with company equipment that same day. It's like nothing I've ever seen before, and it went surprisingly smoother than I could have expected.

We are about to release our second batch of mini-games, tentatively planned for April. It’s a great one because we have our first new major game mode with the multiplayer Battle Arena, inspired by recent smash brawlers. Two to four players use items and pickups to rack up damage and smash their opponents out of the stage. It’s a ton of fun and I think many people will play over and over.

In addition to that, we also have two new mini-games: Race, featuring six fun stages with shortcuts you can take depending on your orb powers, and Panel Battle, inspired by Bomberman’s Panel Paint game mode.

These are designed for up to four players too, however, they also have single-player modes where you’re challenging the clock. Additionally, we currently have four more mini-games yet to be released, which are being spread out between two additional updates between now and early summer.

I don’t know that there will ever be a true way to tell. If we had released in a more traditional premium method, we may not have had the support we have seen from Apple that afforded us the time to refine our game and take feedback in our updates since launch to make it the best game it can be.

Marble Knights is a new IP for us and we hope to make more Marble Knights games in the future, though if no one had paid attention to it as a premium launch, it might have died on the vine.

We still have plenty of fans who aren’t subscribers to the service, so there is still an interest in seeing the game and brand move forward.

I think having the ongoing support of Apple has given us new fans over time and kept our diehard followers from forgetting about it. The future is bright for this new band of heroes.

What can you tell us about your future projects? Could we expect a fourth Apple Arcade title from the studio?

Nothing has been decided yet, but we’d definitely love to continue collaborating with Apple Arcade.

We previously spoke to Wayforward Technologies regarding Shantae and the Seven Sirens and how it found its way to being an Apple Arcade launch title.