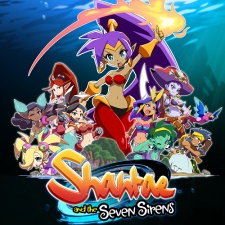 This week we spoke with Wayforward Technologies creative director Matt Bozon regarding the development of Shantae and the Seven Sirens and how the game came to launch exclusively on Apple Arcade.

PocketGamer.biz: Can you start off by telling us about Shantae and the Seven Sirens?

Matt Bozon: Shantae and the Seven Sirens is the fifth game in the Shantae series, and chronologically follows Shantae: Half-Genie Hero, which was Kickstarted by fans in 2013. In this new story, Shantae and her friends receive an invitation to a tropical island paradise, where she will perform alongside others of her kind in the Half-Genie Festival.

This was our shortest dev cycle for a Shantae game, and because we were partnering with Apple, we needed to be on more platforms than ever - and in 15 languages.

During the performance, things go badly for her new Half-Genie friends and Shantae must discover the secret of the island to save everyone from peril. The game world is most like the first three series entries, with a sprawling, interconnected game world and multiple towns, puzzle-filled labyrinths, bosses to take down, and abilities to learn.

Additionally, creature transformations are built into the player's core mobility, while dancing triggers full-screen magical effects. Many familiar concepts are still there, but the way they're handled is very different from previous games, possibly closest to Shantae and the Pirate's Curse in terms of playstyle.

There are also animated video segments sprinkled throughout the game, and an amazing opening animation by Studio Trigger. New to the game is Monster Cards, which can be collected from felled enemies and equipped to build out a customized version of Shantae.

The game is based around the new play style, which was something I've been working on since the completion of the original Shantae in 2001. I wanted to build instant transformations into her move set. We built some of this for Shantae: Risky Revolution (Game Boy Advance), but that game never saw the light of day.

We felt like Pirate's Curse did it even better - however, that game didn't use the usual Shantae animal transformations, and almost played like a whole new character. Half-Genie Hero was meant to invite new players with brand basics, like monkey and elephant transformations. With this new game, Seven Sirens, we wanted to experiment with the move set and try de-coupling it from her signature dancing completely.

The idea of her being in a new location with new aquatic-themed enemies and transformations, new characters, and fewer of the familiar Shantae tropes was meant to help inform players that this would be a very different experience from before.

Our core team worked for about 18 months. We had a lot of help from our usual partners with upwards of 50 talented individuals contributing to the project, but the main on-site team was around a dozen people, many who had worked on Half-Genie Hero such as lead programmer and now Shantae veteran Walter Hecht.

This was our shortest dev cycle for a Shantae game, and because we were partnering with Apple, we needed to be on more platforms than ever - and in 15 languages.

WayForward Engine was enhanced significantly to push 4K 2D on supported devices, and for the first time in a Shantae game we have a level of detail which scales to keep framerates smooth across all devices, and at the highest resolutions, they can support (without sacrificing gameplay).

It was also our first time adapting Shantae to TV-style animation, which was an exciting challenge of its own! Mostly, the goal of making a console-style game that could change in real-time between touch controls and Dual Shock/Xbox One controllers was a tricky one to achieve, but I think we pulled it off.

I usually don't feel comfortable with a Shantae game until I can run the whole thing from beginning to end and experience the whole quest. It was the same with this one. All of the art, music, and gameplay was fun on its own very early on.

Everyone here is super talented. I very quickly feel confident in the work as it rolls in, but I have to wait and see if my design and direction is adding up to a good game overall. As usual, I start to step back and really enjoy what we've made by the end, and I don't want to stop playing.

How did the partnership come about with Apple and Apple Arcade?

I was told that they were fond of our enthusiasm for Apple Watch. We had worked closely with Apple leading up to the first watch release. Although, I don't know exactly.

I like to think that our passion and creativity in making Watch Quest: Heroes of Time (starring Shantae and Bolo) played some part in Shantae and the Seven Sirens, as well as our original side-scrolling run 'n' gun, Spidersaurs, being in the first wave of Apple Arcade releases!

We launched with what we think is a satisfying chunk of adventure that ended on a cliffhanger, but this update substantially increases the content

Why did you feel this was the right time for Shantae to make her debut on mobile?

We never thought of this as a Shantae mobile debut, really. We'd had huge success on iPad 1st generation with Shantae: Risky's Revenge. This new game was meant to be a simultaneous launch on all platforms, adding Apple TV to the console group and a Mac version releasing alongside the Windows PC, plus iOS to really show off the high resolutions and performance with and without controllers.

But, as we learned more details about Apple Arcade and its pending launch, we shifted our plans to launch on Apple first, even though it was not an exclusive title.

That wasn't our intention, but it ended up being very good for the end product. The Apple Arcade release was designed to be delivered in two parts so that we could best support the release of Apple Arcade and get players into that game right away.

It did have some of the benefits of a soft launch though since we were able to revise our portrait system and address many quality-of-life comments that we saw on streams or social media.

The whole team loves watching people play the game, and we can't wait to see how players react to the completed adventure! I'm very happy with Seven Sirens, and I'm sure Shantae fans especially will find a ton to fall in love with.

When it comes to updates, the main thing to know is that there is a "part 2" update on the way to Apple Arcade this spring (plus the full game coming to consoles and PC).

We launched with what we think is a satisfying chunk of adventure that ended on a cliffhanger, but this update substantially increases the content and adds more of everything - more labyrinths, more bosses, more transformations, more abilities, more animated cutscenes - and brings the game to its epic conclusion.

There's going to be a whole lot more to see and do. I don't have anything to share yet beyond that, but we are planning to support the game with the usual fixes and improvements... and we do like to surprise fans from time to time.

Only that we have more mobile games in the works, as well as continuing our console legacy. We've been super busy over the past year with Shantae and the Seven Sirens, Spidersaurs, River City Girls, Mighty Switch Force Collection, and Vitamin Connection. But we've still got even more surprises in store for WayForward fans!