"Being able to share ideas that I had in my head and turning them into a medium that others could experience was so exciting." 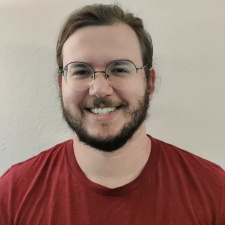 This week we spoke with Roblox software engineer Corey Robinson.

Corey Robinson: I currently work on the social team as a software engineer at Roblox. This usually entails working on features like chat, groups, friends - anything that allows our users to really communicate and interact with other people on the platform.

I think it all started when I was young and I got my first Game Boy. My first game was Asteroids and thee feeling of being able to fly around and shoot rocks felt so exciting to me. I was always interested in how people were able to think of an idea and somehow make the idea a reality through different mediums like film, games, and art. Eventually, as I got older my interest started to shift into wanting to learn how I could create games like this myself.

Being able to share ideas that I had in my head and turning them into a medium that others could experience was so exciting.

I remember when I was 14, I looked up some sandbox games that I could build and create games in without much knowledge of programming. I then stumbled upon Roblox, which at the time was still very new and only had a few thousand players. I decided to create a little obstacle course game for fun but didn't really expect anything from it. Next thing I know the game had over 8,000 plays, which was a lot back then.

Immediately, I became hooked. Being able to share ideas that I had in my head and turning them into a medium that others could experience was so exciting. I continued to make games on Roblox throughout high school and college, then making friends with other Roblox developers, one of whom invited me to California to attend the Roblox Developer Conference (RDC). This ended up being a huge break for me because it allowed me to meet a bunch of other developers, and more importantly, a number of Roblox employees.

From that experience, I landed an internship with Roblox on the marketing team, which introduced me to the company for the first time as an employee. I would go on to attend RDC in the years following, each time catching up with Roblox employees who encouraged me to finish college and come work for the company. The whole experience was life-changing and eventually turned into the job I now have.

Most people that get into programming usually study Computer Science. However, by the time I entered college I had already been programming for a few years, so decided to study a field I knew less about but still involved computers. I chose to study IT, which still had some classes about programming and data science, though was a lot more about building websites, creating networks and how they all communicate with each other.

Discrete math is a great class to really understand programming too. There really isn't much programming involved but you dive into logic gates and binary which I found to be extremely interesting. It became one of my favourite classes. Additionally, while you wouldn't expect it, taking speech classes really helped me to understand how to give good and insightful presentations. This is very useful in this line of work.

People think that you have to start very young to be a good programmer, which I don’t think is always the case. I know plenty of people who didn't even go to college for Computer Science or IT yet still ended up getting into the field much later in life. If you have a passion for something, go for it and see where it leads.

Make sure to work on projects outside of school and work. Companies really like to see that you have a passion for creating and developing games or applications in your own time - especially if it somehow relates to the company where you are applying. Also, just generally having a passion for playing games can be a big plus.

It has pushed me to step up into a bigger role than I would have if we were still in the office, something I truly value. Traditionally, Roblox does an amazing job with new hire orientation and the company gives new employees a lot of resources to get them settled in their roles.

Employees who are starting their jobs at Roblox during the pandemic simply do not have the benefit of in-person orientation. So, because of this, I have been able to take a leadership role in mentoring and helping many of the new employees joining my group, which has been a great learning and growth experience. I do miss the social events at Roblox, as they offer a great opportunity to get to know your work colleagues in a casual environment.

Everyone is in the same boat as you. Just take your time and know that nobody expects the same style of output we are used to seeing when working in an office.

Saying that the Roblox platform is inherently a great place to gather and connect with friends, and as a company, we are working to create virtual town halls (company meetings) that allow all of our employees to hang out and socialise. Furthermore, I don't have to get ready and drive to an office these days; I can just wake up and sit at my desk and start working.

The only real difference is that my mornings start a little later because I don’t always have to dress to impress my fellow colleagues or office visitors. I'm able to move from waking up to work with ease. Besides this, my days are mostly the same from a work perspective, with the only difference being that all communication is done over chat, email, and video calls.

The biggest advantage is that you can really live wherever you want and you are not limited to the location of the office anymore - a big plus for many of my colleagues. The downside is the ability to easily reach people and work collaboratively in a physical environment.

I miss those kinds of connections the most, as well as the free snacks that Roblox provides. Not just because they are great snacks but because I would often have some of my best conversations with my colleagues in the common areas/kitchens.

I think having a remote work location already set up at home - even before the quarantine - would have helped my initial productivity. During the first few months of remote working, I was just trying to get an office space set up at home that felt comfortable and separate from the rest of the house.

It took some adjustment to find the right office equipment and resources that allowed me to be the most comfortable and productive.

Everyone is in the same boat as you. Just take your time and know that nobody expects the same style of output we are used to seeing when working in an office. Don't be afraid to ask for help from others either, through chat, email or whatever you use.

It makes more sense to move back to the office for me, personally. I thrive more in an environment that is separate from my home, that also allows me to eat lunch with co-workers and collaborate more effectively. Although, I don't mind if we were to get a day where we could work from home each week.