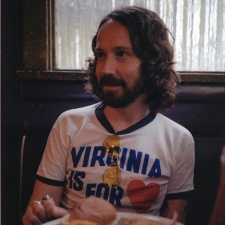 Robbie Paterson: I work on the marketing team, figuring out how best to promote our games. I also help to coordinate our public relations agencies so they can do their jobs. Some might say I'm terrible at it.

I started out many years ago working in a shop with some fellow video game fans who helped me get into blogging. After that, I stumbled into an internship at a video game PR agency called Indigo Pearl.

I was 30 years old when I finally decided enough was enough and wanted to try my hardest to do something that I love.

I had no idea what I was doing, but slowly but surely things started to click and I eventually ended up staying there for seven years, going on to become the head of PR. Devolver Digital had been a client since day one, and over the years I'd gotten on their nerves so much that they finally gave in and hired me.

I actually wanted to be an artist when I was younger. I suppose I've always had a very creative mindset but I'd never been able to match that ambition with any kind of direction or commitment. Basically, I was flaky.

I was 30 years old when I finally decided enough was enough and wanted to try my hardest to do something that I love. I'd gained a small group of friends in the video games industry and managed to parlay that into an opportunity. I guess you never really know what you'll end up doing, but don't give up!

I played video games, played in bands and watched a lot of movies. That's about it! I studied Literature at University, which may have influenced my penchant for creative writing in PR and marketing, but it's safe to say I wasn't trained for my current role.

I work from home, so with Devolver Digital spread across pretty much every continent, it means everyone is online at different times. In the morning I'll usually catch up on emails and Slack first thing, go for a run, eat, shower, get dressed etcetera.

Anyway, generally, the first half of the day is for doing any tasks I can do independently and then spending the afternoon/evening on calls ranging from weekly catch-ups to planning meetings, new business and salacious gossip. Oh, and on Tuesdays, myself and JM Specht record the Devolver Digital Forkcast - available now wherever you get your podcasts!

The biggest advantage is being part of a team that really gives a damn about what they're doing. There are no disadvantages; marketing is the greatest invention of the last 200 years.

I always say that the most important thing you can bring to any job is a passion for what you're doing.

I really don't know. I guess it's impossible to completely ignore what other people are up to but in general, everything we do at Devolver Digital is borne from conversations with developers.

We like to collaborate, though I guess some folks may think that marketing is only out to strip the soul out of everything in order to make money. Maybe some of it does do that, yet I can't say I've ever really paid much attention to what other people are up to.

I always say that the most important thing you can bring to any job is a passion for what you're doing. If you really love video games and take a genuine interest in how they're made, there's no reason you couldn't do what I do. Also, ask questions. You can never ask too many questions.

We all work from home, so our day-to-day hasn't really changed in that respect. However, the lack of events and the ability to visit each other has been really hard. Luckily, I've worked with the majority of folks at Devolver Digital for many years and have lots of great memories of hanging out together. It does really suck though for our newest members who have never met some of us in person.

Seeing as I learned everything by being around other people, I don't think there's anything that could have better prepared me for a career in video games other than playing video games.

Coming in as a fan gave me the impetus to work hard and learn from people, so I don't feel like I was at a disadvantage despite my inexperience. Anybody can learn to do what I do! I wish somebody had warned me about Gamescom, though.

Take a genuine interest and be prepared to fail sometimes.