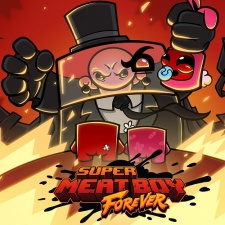 Tommy Refenes is the co-founder of Team Meat and the popular Super Meat Boy series.

So welcome to the Indie Spotlight, where on a semi-regular basis a developer will tell us about their life and work, as well as the many challenges facing indie developers in the modern mobile and handheld market.

This week, we spoke to Team Meat co-founder Tommy Refenes about his journey into indie development and why Super Meat Boy Forever was the worthy successor to the original.

Tommy Refenes: I worked for a really terrible company then quit, and said to myself that I wouldn't work for another ever again, so I didn’t! I did contract jobs while I tried to find a career working for myself. Eventually, that led to the creation of Super Meat Boy and it’s been pretty smooth sailing ever since.

It’s a game that plays the same everywhere so there was no reason not to put it on everything!

There really isn’t a typical day for me. It really depends on where we are in development. For instance, during the last few weeks of development on Super Meat Boy Forever, it was just a bunch of work. Currently, we are planning for the next game so it’s much more relaxed. I’m currently writing scripts and stuff for our next game while watching The Simpsons.

I found success in the early days of the indie "boom", so a lot of doors that are closed to other developers just starting out are open to me. The challenges I face are more related to the work I’m doing (i.e. designing a boss, figuring out how to connect this part of the story with that part of the story, etcetera), so I don’t have too much to do with the process of being an independent developer. I’m not a great person to ask about this because I really feel it’s been a pretty easy ride compared to what others go through.

What is your opinion of the games market for indies right now?

Could you tell us about Super Meat Boy Forever, and why it felt right for mobile and Switch?

The game started as a challenge to myself in 2011. Around that time the App Store was exploding with really bad ports of classic games like Sonic and Megaman (that weren't at all designed for the platform) being put up with bad on-screen controls just because the IP holders wanted to make a buck.

At one point I called the App Store the "Tiger Handheld" of this generation because I felt the experience that companies (mainly larger companies) were putting out were not great representations of the IPs they represented… much like the Tiger Handheld games of the ’90s. That was also shortly after Super Meat Boy launched, with fans really wanting an iOS/Android version, but back then that version wouldn't have worked but I kept thinking about it.

I wanted to see if I could make a Meat Boy game that felt like Meat Boy that only used one button. So at GDC 2011 in my hotel room, I took my laptop - which had the original Super Meat Boy code on it - and created a special version of the Meat Boy character that would always run and could change directions by jumping off walls. Times have changed a lot since then. There are really great games on the App Store because developers now understand how to design for the system and don't try to shoehorn a design that works.

We ended up prototyping a version of the game in May 2014 and showed it off at PAX West in September that year. It was pretty great - definitely different from what people were used to. Unfortunately, shortly after that public unveiling all work stopped on the project and couldn’t be picked back up until 2017. When 2017 came around, I looked at the prototype again and thought that there was a really great game to be made there.

I always knew we would bring it to whatever consoles were out at the time and PC. It’s a game that plays the same everywhere so there was no reason not to put it on everything!

The original Super Meat Boy was a ginormous win for indies, how do you follow that legacy and success?

If you can work toward that dream game while living your life to the fullest, then that should be your goal.

I believe you follow it by staying true to the philosophies that created the first one. That meant making the game I wanted to make. I love the Meat Boy characters and I wanted to create a game that was easier to play but still felt authentic to them.

I also wanted to go all out on the story and create a bunch of cutscenes to tell a narrative that gave more depth to the characters while setting up events for future projects. In the end, it’s about keeping myself and the team engaged and invested in what we’re working on, otherwise, all of this just feels like a boring job.

I only had to fix a few bugs with a handful of patches. Most stuff was found and fixed within a week or so of launch. The Switch version took a little longer to patch but there is a lot more that goes into it than uploading new patches to the Epic Games Store.

Any stats, downloads or numbers you can share regarding the launch?

Not really, I don’t look at sales numbers or anything like that. It’s a weird black hole distraction that I learned not to let myself fall into back when Super Meat Boy launched years ago. The bank account is already telling me we have enough to make the next game so that’s good!

I want to make an RPG based on the movie Over The Top and I want to get weird with it.

For me, that means enjoying what I work on while providing for my family.

I’m writing the script for the next game and we’re going to be entering the planning/concepting stage once everyone is back from break.

Is there an official date for the iOS and Android launch?

The team went on break right after the game launched and I went on like a 90 per cent break after the Switch patch went live. I have been doing little things here and there for the PlayStation and Xbox versions but I’ve just been taking my time.

With iOS/Android, it's something we’ll probably tackle later in the year with no set date on when it will be completed. However, it is something we are going to allocate resources in the near future.

Finally, what advice would you give other developers on ‘making it’ as an indie?

People aren’t going to give a damn about what you gave up in order to make it as a game developer, they’re only going to care about the game you make, so find a way to make your game without giving up more than you can reasonably live without.

If that means it takes 10 years to make your game while you work another job and live a life, do that. If you can work toward that dream game while living your life to the fullest, then that should be your goal.