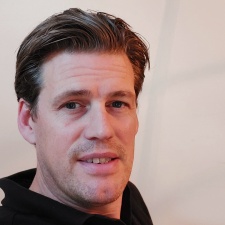 This time, we spoke to Gamedia CEO and founder Dittmar Tukker who recently pitched HIX as a part of The Big Indie Pitch at Pocket Gamer Connects Digital #6 (Mobile Edition) and walked away with the prize for third place.

Dittmar Tukker: Hi, I’m Dittmar Tukker and I’ve been active in the games industry since 1998 in various roles before founding Gamedia in 2007. Currently, we have a talented team of 10 experienced people that together possess over 91-years of experience, pushing pixels around on all sorts of screens.

In the beginning, we mainly did work for hire and we’ve had the pleasure to work with over 100 partners on various well-known games, TV shows, tech startups and all other kinds of IPs -  including Barcelona player Lionel Messi. Although for most clients we do pretty much everything from concept to publishing, from hosting to even run their app stores or ad campaigns.

So after building up lots of experience over 14-years, we decided in 2016 to start creating our own gaming IPs.

Still, there was always that creative itch and we’re always bound to some kind of limitations. So after building up lots of experience over 14-years, we decided in 2016 to start creating our own gaming IPs. We’re excited to say we have a whole range of games in development for quite a while now, ranging from casual puzzle games for mobile and Nintendo Switch to double-A/triple-A multiplayer shooters for PC/console.

HIX: Puzzle Islands was the first in line and we’ll share more news about our upcoming titles soon. We’re inspired to belong to the best of games in every aspect, although we’re still small we’ve big dreams.

Tell us about the game HIX that you pitched at the competition.

HIX: Puzzle Islands is a charming puzzle game about two godlike brothers, Hix and Dix, who for some reason got into a bit of a fight lately. As a result of this, the more devilish brother, Dix, has made a mess of things and Hix could really need some help repairing all of the mixed up islands.

As the player, you need to reconnect all the roads and waterways between two endpoints by swapping two hexagon-shaped land tiles at a time. Once all puzzle pieces are placed at their original position, the level is solved.

As it’s a premium title, we tried to make the game a nice and relaxing experience for true puzzle lovers in as many ways as possible. Who knows, you might even be able to reforge the brotherly bond that was broken.

What do you think are the most unique and interesting aspects of HIX that gamers may never have seen before?

First of all, the puzzle mechanism at its core is something you’ve not seen before: it’s a bit of a mix between jigsaw puzzles and connecting the lines/dots. Secondly, the level of polish and juice we added to a puzzle game is not something you see very often either.

We put a lot of effort into the two main characters, which by the way are motion captured with our own created technology. Besides all of that, we've added hundreds of small objects, animals and animations to make the islands and worlds feel alive.

HIX is a traditional puzzle game with strong characterisation and a vibrant world. What made you choose to create this type of game, especially given how competitive the puzzle genre is, and what do you think you bring to it that may not have been seen before?

I created a slightly similar puzzle game around 2002 with a colleague who was at Lostboys/Guerrilla Games at that time. I also created loads of other puzzle games for Europe’s biggest puzzle company up until 2007, so I knew there was a big market for these types of experiences.

To check if this was still the case in 2018, we tested the first prototype as a mini-game inside another game on a big technology website. We received very positive reactions - specifically for small mini-game - and so we knew we were onto something.

As we’re a premium experience, we have a different strategy than other free-to-play puzzle titles, one which is less competitive and more about the quality.

We’re prepared for the next phase and the changes it will bring to the games industry.

How did you come to choose the platforms that you would develop HIX for?

Most of the games we’ve created over the past 14 years were mobile orientated, and therefore we’re very experienced and comfortable in this area. Obviously, we also think it’s a very good match to reach our audience. Not to mention, the portable hardware aspect is perfect for puzzle games as you can play it anywhere, anytime.

Looking at the studio a little more now. How hard is it to survive as an indie developer?

We've been around for quite a long time, so I’ve seen a lot of studio’s fail for various reasons…. it's a very tough business. I personally think it will get even harder to survive as an indie, looking at all these mergers and acquisitions taking place every day.

So we’re prepared for the next phase and the changes it will bring to the games industry. Of course, if you do manage to survive, it's truly one of the best things out there.

If you're able to manage or at least understand the whole game-chain, and not just the game development part, then you'll be more likely to survive and make better decisions.

Spend some time on boring data and figures, read plenty of articles, understand what excites a publisher or investor and check how others do their marketing. Also, it's way faster and cheaper to learn from other people's mistakes - don't try to make them all by yourself!

It was great, you meet fellow indie developers from all over the world and obtain a lot of great feedback and tips from some of the most experienced people within the games industry.

I was a bit sceptic about the online version compared to the ones that have been held at events at first, as you cannot handle a playable version of your game in real life and see how they experience your game in real-time. However, it worked out really well. It also gives your game some great exposure, so I cannot think of a reason why you shouldn't attend.

Pitching comes down to the essence of your game. If you cannot explain your game in a short amount of time to a jury, it will be even harder to convince players to buy your game for sure. With such an experienced jury you’ll always get some tips on areas where you potentially have a blind spot, so it’s a great way to improve and make it better.

We obviously hope that many puzzle lovers will enjoy our game all over the globe and that it will grow into a well-known IP over the years. Besides HIX, we have several other games in development for mobile, PC and console. We’ll first release HIX for the Nintendo Switch, then after that we have another puzzle game ready to launch.