What does a day in the life of a junior game designer at Gameloft Toronto look like? And why choose a career in the mobile games industry? 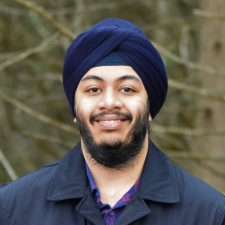 PocketGamer.biz - and industry sites in general - have a tendency to preference the C-suite, decision-makers and financiers: the forces that can have a seismic influence on the industry at large. But one thing that the recent Pocket Gamer Connects Toronto truly emphasised was the sheer diversity of people in the games industry. Particularly the creators and teams coming into the industry that will have a central impact on the titles that reach our audiences in ways that the exec board never could.

Geet Chopra, junior game designer at Gameloft Toronto, spoke with PocketGamer.biz on making a career in mobile, the essential skills to becoming a game designer and the most underappreciated element of the role.

PocketGamer.biz: You've been working on mobile games for most of your career – what was it about mobile that steered you in this direction?

Geet Chopra: One of the biggest reasons why I work on mobile games is their accessibility to players. There is a clear, bigger market for mobile gamers, as almost everyone today owns a smartphone and can enjoy a variety of games on their devices at any location and time of day.

Recent advancements, like the introduction of 5G, along with the consistent hardware upgrades put out by flagship devices every year, also bring us one step closer to competing with consoles and PCs. 5G will also make cloud rendering and streaming more probable on phones, which will enable more lower-end devices to run high-quality games, further increasing exposure to more players.

The F2P business model, while fairly common on mobile, is also growing in popularity on other platforms, which instantly increases a game's appeal to the player, especially in parts of the world where affordability poses an issue. Monetising your game through microtransactions and ad revenue – when executed well – is a proven method of providing steady income for your game, keeping it in business for a longer period of time, as compared to some one-and-done games.

Of course, mobile gaming presents its own unique challenges, but there is no scarcity of developers, ranging from indies to AAA giants, who strive to push this space and bring high-quality experiences to more players across the world. Mobile gaming is nowhere near its full potential right now and I am excited to contribute to the growth of this industry by crafting unique and engaging experiences for players.

You've been engaged at a few studios before reaching Gameloft – StareOut Games and HotHead Games – can you tell me about your experiences at these indies, and how it differed to Gameloft?

I cherish the time I spent developing games at StareOut and Hothead, because I got to take part in multiple areas of design and development and I saw mobile game development through different roles and business models.

As a studio grows in size and budget, the responsibilities of an individual become more focused. As an example, I was working on both designing and developing games at StareOut Games. Sometimes I even uploaded builds on the App Store. At Gameloft, these tasks are split across several team members, while I solely focus on game design, allowing for more intricacy and focus in our respective roles.

StareOut Games, being a hypercasual game developer, also employs a distinct revenue generation model. Hypercasual games focus more on multiplying their ad revenue through a lot of downloads, while having a low priority on features like in-app purchases. Hypercasual games also have shorter lives than other genres, which is why StareOut relied on consistent ideation and prototyping to consistently put out new titles.

I worked on similar genres of games at HotHead and Gameloft, and both studios employ a more traditional revenue generation model, creating a healthy balance between ad revenue and in-app purchases.

Can you give us a snapshot into being a junior game designer at Gameloft Toronto: what does a day in the life look like?

After a tiring commute from my bedroom to my living room, I start my day with a stand-up meeting between the designers, where we all catch up on each other's responsibilities and tasks for the previous and the current day. I report to the Lead Game Designer and work on designing and integrating new content for Disney Magic Kingdoms – which is Gameloft Toronto’s most successful title to date and recently celebrated its 6th year anniversary!

Most of my days are filled with a nice mix of attending team meetings on various aspects of design and development, completing some design tasks and integrating features that I am solely responsible for. As a junior, there is no shortage of support, motivation and resources available to me, from my seniors and other team members, which furthers growth, confidence and independence.

As a designer, it is important to spend some time during the day to play our own games and competitor games to stay in the loop with current trends in mobile gaming. This helps us suggest new features for development and explore areas of improvement in our constantly growing game.

As I started working during the pandemic, I have never been to any office to work in person and while there are clear advantages and disadvantages of staying at home, I am also excited to explore a work day in the office and compare it to working from home!

I was glad to be a part of the first Pocket Gamer Connects event in Toronto, which had a great turnout of members from different studios and panelists who spoke on a variety of mobile game development topics.

It was heartening to see industry members from other studios in Toronto and learn more about the games they develop – especially with the indie developers, who presented some wonderful titles. It is evident that there is no shortage of industry talent across studios of all sizes in Toronto.

I expect to see an even bigger turnout of studios and indies at the next conference. I was particularly intrigued by the panels on emerging technologies, such as blockchain. While still in its infancy, it is exciting to see how video games could leverage these new technologies in the future and evolve gaming to unknown territory. I also learnt more about several other topics in game development that I am not exposed to during my regular work day, like crafting a healthy game economy or the business aspect of creating games.

Gameloft Toronto has been scaling up considerably in recent months, but currently maintains a modest number of titles. What can we expect from the firm in the near future?

We are always happy with the massive amount of support and appreciation we get from our players playing Disney Magic Kingdoms, which is why we will continue to improve that game and introduce new content from everyone's favourite Disney movies in the upcoming months.

Besides that, we have dedicated teams working hard to expand our roster of games at Toronto and we are constantly ideating on current and upcoming trends in mobile game development to find the next big title at Gameloft Toronto.

What advice would you offer to anyone looking to get into game design – and what element of your job do you think is frequently underappreciated or misunderstood?

A game designer's primary responsibility is to create fun and exciting experiences for their audiences, from a game's start to finish. This is a very broad description, which is why there are multiple ways to learn and practice good game design. Here are some tips that anyone can practice, which have also helped me a lot when getting into game design:

When playing a game, try to understand how its different systems function together. Ask yourself why certain mechanics are present or not present in a game. If you think something is not the best from the player's perspective, figure out a creative solution to improve on it. Try to recognise trends and patterns across games, which may give you a sense of what makes a genre engaging.

Put yourself in the player's shoes. Why does a player like a particular feature or mechanic? What should they feel when they come across your game? Is your game conveying that feeling? If not, how could you modify your design to invoke that feeling in the player?

This one should be easy to do! You can learn a lot by playing games, even if they are not directly comparable to the type of game that you are making. You can find design inspiration through any game and knowing how different genres portray a mechanic will help you make better decisions when putting the same mechanic in your own game. Playing a lot of games will also help you stay up to date with different trends in game development and what players are currently enjoying the most.

Design and develop your own games. Start small and only experiment with one or two core mechanics. Show your game to others and get them to play it. Accept criticism and feedback and iterate on this process to make something that players enjoy. Always remember that players don't need too many mechanics to enjoy a game. Think Flappy Bird!

One aspect that I think is underappreciated in the work that game designers do is the essential work of writing and maintaining design documents. As your game and the number of members in your team grows, it is important to document the different features and systems in your game, which keep every member in the loop and eliminate the possibility of miscommunication or misunderstanding later in the development cycle. Even if you are working alone, it is helpful to write a few documents as it will keep you focused on your development goals when building your game.

I believe that becoming a good game designer is an iterative process, and it will take time (I'm certainly not fully there yet), but don't give up, embrace your failures, and continue to learn and make more games. Your goals will be well within reach of you soon