One of four new hires for the British games publisher 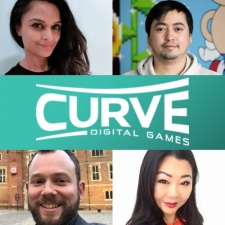 Curve Digital has revealed four new hires with eyes on expansion following a period of growth.

Ranj Vekaria has joined Curve as creative director having previously held 13 years as a creative lead at Sega.

Whilst at Sega Vekaria specialised in advertising, branding and packaging. Vekaria began her career as a creative services assistant at Midway.

Another Sega veteran, Bobby Wertheim is joining Curve as vice president of partnerships. Wertheim held the role of director of content at Sega for over a decade and previously worked at Sony Computer Entertainment Europe.

Finally, Jay Shin is stepping in as business development manager. Shin is the director and co-founder of indie developer Arrogant Pixel and also a lecturer at the University of West London.

"I know first-hand the impact that Ranj, Rich and Bobby will have having worked with them before, and it’s great to be able to add Jay to the team. 2021 has been strong with titles such as The Ascent and Lawn Mowing Simulator, and I’m delighted to continue assembling such a strong team at Curve as we build for further growth."