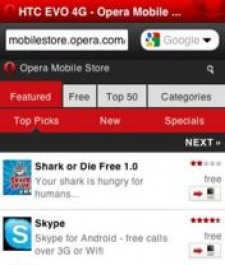 March 9th, 2011 - 11:48am
By Richard Brown
You might have been forgiven for thinking there isn't a nook or cranny left in the crowded mobile app store space, but Norwegian software house Opera would have you believe otherwise.

Primarily known for its family of web browsers  including the smartphone variants Opera Mobile and Mini - the Oslo-headquartered outfit has decided to throw its hat into the app market ring.

Like GetJar, Operas market portal is platform agnostic, so games and applications can be downloaded on phones running Android, Java, Symbian, and BlackBerry OS.

"Our partnership with Appia delivers to all Opera Mobile and Opera Mini users easy access to a wide variety of great content, on any device, all over the world."

Well, not quite 'any', for the eagle-eyed amongst you would have spotted the notable omission from the above list... iOS.

"We plan to release support for iOS devices, where the Apple solution is utilised in order to complete the purchase and download process," said an Opera spokesperson.

"This is through our partner Appia, who work with Apple's LinkShare program.

Available in over 200 countries at launch, nonetheless, the Opera Mobile Store is accessed via a Speed Dial link in the firms browser and reportedly already contains 140,000 apps.

Customers can choose between the typical categories of software, namely free / paid / Top 50 / New, and from lists for bespoke platforms and mobile devices.

Revenue from downloads in the Opera Mobile Store is split in the now customary way of the industry, with 70 percent awarded to the publisher and the remainder retained by Opera.

For anyone interested in distributing a title on the Opera Mobile Store, visit the companys Publisher Portal.