And looking ahead with release of Ruzzle Adventure 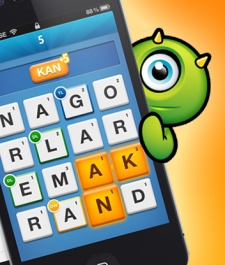 As Gordon Gekko might have put it, ‘Growth is good’. But, at some point, even the idea of growth breaks down.

That might be the most logical response to hearing that mobile developer MAG Interactive won the Swedish Tech5 award for demonstrating growth of 5,740 percent between 2011 and 2013.

Given that MAG isn’t yet the size of Google, clearly this scale of growth had to start from a very low base point. Yet, you can’t argue with the figures, which were verified from its audited revenue data.

M is for millions

Of course, the reason behind the situation has been the massive success of MAG’s head-to-head word game Ruzzle.

Released in March 2012, it’s had over 50 million downloads, and a peak popularity reflected in over 100 million games and 150 million push notifications daily, which propelled the one-time small developer into the big leagues.

Now that’s something MAG is looking to build on with the release of Ruzzle Adventure.

A cross between Ruzzle and Candy Crush Saga, it’s a single player level-based game that has you solving word grids to meet conditions such as limited time. Via Facebook Connect, you can compare your score and progress across the world map with that of your friends.

“We consider it a complimentary release to Ruzzle,” explains MAG CEO Daniel Hasselberg.

One big difference between the two games is Ruzzle Adventure enables its designers to include IAPs such as boosts and power ups; something that isn’t allowed in Ruzzle.

“You can’t have inequality in a PVP game,” Hasselberg says. “At least we don’t think so. Some less successful competitors tried it, though.”

The result is that despite being very popular, Ruzzle only monetizes on in-game adverts or players spending $2.99 to remove ads.

“Advertising worked well for Ruzzle,” Hasselberg says. “That’s because we focus on having interstitials and video ads. I hope banner ads will die. They destroy the user interface of a game.”

Thanks to the new IAP system, which has players buying coins to unlock in-game items, there’s no advertising in Ruzzle Adventures, however.

Hasselberg says he expects this the combination of the two games to continue MAG’s growth, although as a successful company, the years of rates over 1,000 percent are over.

Still, with Ruzzle Adventures peaking in the top 40 top grossing chart for iPhone in its test market of Sweden, and launching soon with support for 10 languages, MAG’s accountant will, no doubt, be kept busy over the coming months.

How to get a job at Ruzzle developer MAG Interactive