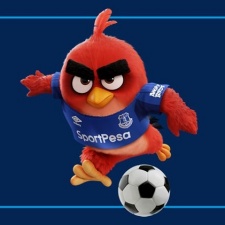 Rovio and Everton Football Club have signed a multi-year sponsorship deal for the Angry Birds logo to appear on the sleeve of the team's shirts.

The logo appears on the left sleeve of the shirt, and made its debut at the recent Everton vs Manchester United match. This is the first season in which teams are allowed to put sponsors on their shirt sleeves.

Everton and Rovio hope the deal will open up marketing opportunities for both firms. Rovio, for example, now has access to Everton's crest, players, and stadium for in-game content.

A deal of two halves

"Angry Birds is one of the best-selling game apps of all time and is also a remarkable success story in terms of the way in which the brand has crossed over from gaming to become part of popular culture. Everyone here is excited about being able to work with such a creative, dynamic and ambitious brand."

Rovio isn't the first mobile games developer to sign a shirt sleeve deal with an England football club. Nordeus signed a similar deal with Stoke City back in May 2017.

The deal would have made even more sense if Rovio had continued development on its game Angry Birds Football. However, the game was canned after seven months in soft launch as it wasn't performing to internal expectations.