Time spent on mobile may be reaching a peak, however 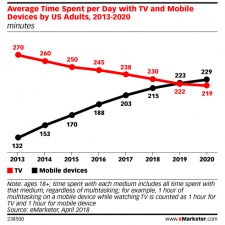 eMarketer’s latest forecast shows that Americans will be spending more time on mobile devices than they do in front of the TV within the next few years.

2018 will still see adults dedicate more time to television than any other medium at nearly four hours a day, but the gap is closing in for mobile. The study predicts that by 2019 mobile will be the new leader in time spent, with three hours and 43 minutes of engagement. By then, television will have slipped down to three hours and 42 minutes.

That’s not a huge initial margin, but the trajectories for both mediums are heading in opposite directions. However, eMarketer expects mobile use to peak sometime in the near-future.

Newer devices like smart speakers, smart cars, wearables and VR headsets are expected to dent mobile’s upwards trajectory. These products are expected to take charge in some of the tasks people use mobile for, diminishing use.

Mobile isn’t likely to start plummeting, but the research suggests a plateau is on its way.