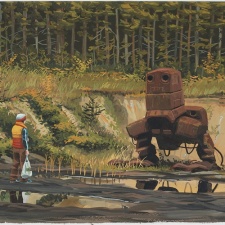 The programme sees aspiring games developers whisked away to the Swedish woods to work on their dream game in a cabin under the tutelage of industry vets.

A viewing of the piece went online today, but a physical showing will be held from October 18th to 22nd at Bukowski's classic premises in Stockholm (Berzelii Park 1).

The bidding itself will take place on October 23rd, with the painting part of the Contemporary Art and Design auction.

More recently the rights to his Tales from the Loop were acquired by Amazon Studios, which has plans to develop it into an eight-episode live action series.

“I’ve always had a deep appreciation for Stålenhag’s incredible talent, from his early days as a games developer to his now one-of-a-kind illustrations that blend futuristic science fiction with rural life,” said Palm.

“As a veteran games developer, I’m captivated by the creativity of his work and wanted to share this rare piece of art for someone else to enjoy while also benefiting the next generation of aspiring game developers, who are visual storytellers in their own right.”